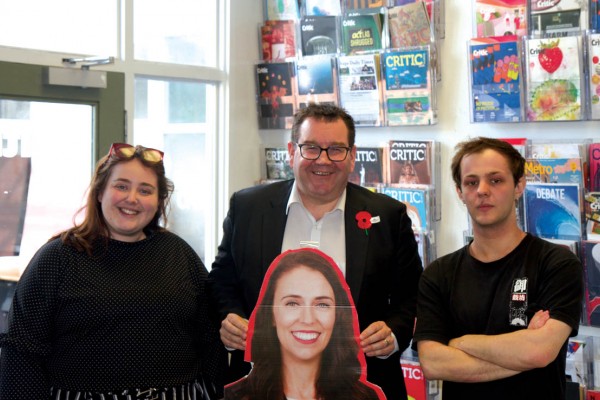 Quizzing and Shooting The Shit with Daddy Robertson

He turned up bang-on 2:30pm with his PR dude and a warm hello. He seemed completely at ease within moments - possibly a mix of the confidence that comes after decades of interviews, and because he felt at home in our office. As a member of parliament since 2008, and also former OUSA President, it could have been either. It doesn’t take long for him to spot a photocopy of his first ever campaign blurb that we’d found - stoked with his promises and priorities should he be elected onto the 1991 OUSA executive.

Although he lost that election, he would get a second chance during the 1992 by-election, beginning a lifetime of wins for Grant Robertson, culminating in becoming the current Minister of Finance, you know, the person in charge of all the money.

And, of course, as the associate Minister for Arts, Culture and Heritage, we insisted that he drew for us while we interviewed him, even if he cheated and wrote us an acrostic poem instead.

♥ Can we have some money?

Grant - “Cos if I gave it to you I’d have to give it to all the student magazines, and then it would get out of control.”

♥ Can you look at the Critic budget and give us financial advice?

Grant, at one point, referring to the fact we’d just recklessly hit print on an excel spreadsheet - “look at this - this is ridiculous”.

Grant at another point, stating the obvious - “This is not sustainable.”

We only asked for the meme value, but it turned into a serious roast session that resulted in some solid advice. We skirted around the question of whether Critic should demand more money from OUSA, which he caught onto and promptly reminded us that just because it was financial advice from the Minister of Finance didn’t mean that we could use it as genuine leverage.

♥ Would you rather have chainsaws for legs or arms, and why? Consider how this will affect your intimate relationships.

Grant - “I just think the legs would be really awkward. How would it work? Arms - obviously - on a really slow speed you could pick things up. And also it would cut through a lot of red tape.”

♥ Will postgrads finally be eligible for student allowance this year?

Grant - “This year? No. Not in the cards for this year. It is something we want to do and we recognise that is an area where it has been difficult for a lot of people, but we have to match that against a whole host of other priorities.”

Charlie - “Do you think we will have to wait until a second term?”

We asked Grant to draw a self portrait and he gave us this:

Grant was shook that we called it a “reign”.

Grant - “It’s an elected position! It’s not called a reign by anyone!”

We had a bound copy of all of 1993’s Critics handy, and he flicked through it to show us the special edition of Critic that the team churned out overnight when students occupied the registry building, followed by a dramatic police response.

Grant - “It was the most bizarre and ridiculous event. I remember being incredibly proud of the fact that they got this out overnight, cos there was no way that other media outlets in the country were going to.”

We also heard a rumour that back in the day Grant also used to have to approve Critic before it went to print, although he said “it wasn’t so much approval, more like, [making sure OUSA is not] gonna get sued. In practice it meant I worked over deadline night and Colin [the Editor at the time] would bribe me with KFC.”

Charlie - “Someone said that old Critic would just get you fairly drunk and then get you to approve things.”

♥ Did you and 1993 Education Minister, Lockwood Smith, ever meet again after your reign? Was it awkward?

For context: Grant and Lockwood butted heads quite spectacularly during his presidency. At one point, he and other students were banging on the windows of a conference he was speaking at to get his attention.

Grant - “We most certainly did [meet again]. He was the speaker of parliament when I became an MP which, truth be told, was quite awkward, and Lockwood certainly remembered me. There were moments of [awkwardness], and I certainly felt occasionally in parliament that he was remembering. I’ve had quite a lot to do with him after that. I did manage to get on ok with him later on in life. That’s what happens in life.”

♥ As Minister for Sport, what is your least favourite sport?

Grant, outraged - “You can’t ask me that! Then I’ll upset all the sporty people!”

Then, he immediately confessed - “I’m not a huge fan of motor racing. I like driving, but watching? That’s not my favourite thing in the world. But I like almost all sports. It’s like your children, you love them all.”

♥ What are your thoughts about going bankrupt to wipe student debt?

Grant - ”Not good. I know in the past people have done that … personally, we don’t want people to be in that position. It does limit you and what you can do.”

Grant - “It’s not something I’d advocate at all.”

Grant had to leave to do an interview with the ODT, which he did just outside our office without a thought for our feelings.

Grant, as he’s going out the door - “Just to confirm, everything before you said we were about to start the interview is off the record.”

Grant - “I know we didn’t, but I’m telling you. It’s libellous on the people who got drunk.”

It’s ok Grant, we’ll take your secret to our graves.