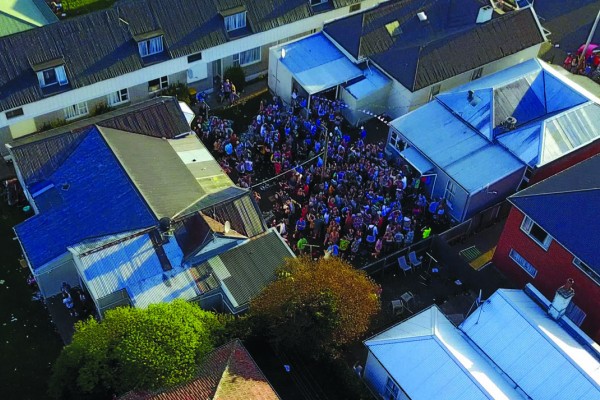 Before a plague of freshers and the grotesque huckster’s paradise that is Tent City, North Dunedin was overwhelmed by Flo-Week. An age-old tradition (as in it’s been happening for more than a year), Flo-Week (short for Flatting O-Week) occurs a week before actual O-Week. Powered by alcohol, No-Doz and broken glass, second and third years from across the city flood Castle Street. These were the highs and lows.

Castle was flooded with a sea of black clothes and the sickening smell of teen angst. All of the repressed pain from rejection and hangovers came out in Guns N’ Roses shirts and fingerless gloves.

Quite a colour-scheme change from Wednesday, Castle transformed into an Auckland girl’s stomach before Bondi Sands. The perfect excuse to show off summer tans, fake or not, White Out was a party to end all parties, and also marked the end of Flo-Week and the arrival of the freshers.

Dunedin weather showed its true dark and stormy colours this night, bringing down a torrent of occasional showers and temperature below 15 degrees. Dunedin weather? In my Flo-Week? Unacceptable.

Once again, a plague of rain down on Castle which may have been divine intervention to give our livers a break or just shit luck. Either way, even the breathiest of breathers abandoned all hope. A tragic waste.