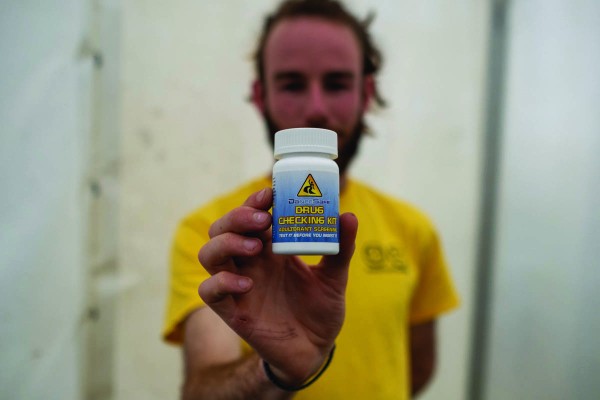 The Otago University Students’ Association (OUSA) ran a drug testing service over O-Week, the first time this has been offered in New Zealand outside of music festivals.

Debbie Downs, OUSA CEO, said that “It’s all very well for people to say ‘just don’t take drugs, just don’t take them,’ but that doesn’t work. So the next best thing we can do is educate and put harm prevention strategies in place”.

A tent was set up behind the OUSA Clubs and Societies building, where people could bring their substances and get them tested to ensure that they had the drug they thought they did, and not a potentially dangerous or unpleasant substitute.

The service was run by KnowYourStuffNZ, a professional pill testing service, in conjunction with the New Zealand Drug Foundation. The ‘client,’ or person getting the testing done, handled the drug at all times so that there was no question of possession or dealing on the part of OUSA or KnowYourStuffNZ.

The process is not a 100% guarantee of safety and OUSA emphasised that the only way to be completely safe is to not take illegal substances at all.

Downs hoped that the space would be private and anonymous enough for people to feel comfortable using the service. “One of the reasons that we’re setting up in the space we are is that it’s a great safe space, it’s a controlled space, and it’s our own private property, so if there was any trouble we would be able to trespass people.”

Most students Critic spoke to were in favour of the service and said they would consider using it if they were going to take an illegal substance.

"I think it’s super important, especially when you have students who know nothing about these drugs just taking them without caution! I'd totally use this if I was unsure about something," said one student.

Another said that "So many people were hospitalised at Electric Ave and lots of people that I know didn’t sleep for days and were real sick, so you gotta test that shit".

Another said they "Would probably rather take MD than paint thinners".

A police spokesperson said that the “Police’s focus continues to be on targeting organised criminal groups who manufacture and distribute harmful drugs to our communities”.

“Guided by the Policing Act 2008, the Solicitor-General’s prosecution guidelines, and Police’s Prevention First operating model, officers apply discretion on a daily basis in dealing with a range of matters, including the possession and use of drugs.

“Applying this discretion increasingly includes the use of alternative resolution options including pre-charge warnings, Te Pae Oranga, and referrals to health and other support services.

“However, the possession and use of illicit drugs remains illegal and prosecution remains an option in order to prevent harm and keep people safe.”

Downs hopes that proving that drug testing can be done successfully and safely will help drive legislation change. “I would like to see this become accepted mainstream.

“I have heard anecdotally that a lot of other people would do this if the legislation was changed but they feel the risk without this legislative change is too great. So we’re going out on a limb, but I feel that because of our place and what we do that we’re the kind of organisation that can do it.”

The service ran from Wednesday to Saturday. Critic goes to print Thursday night, but OUSA confirmed that the first few days of testing had been well attended.