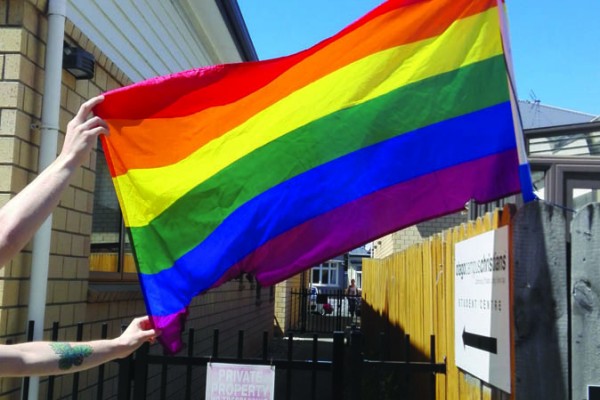 Critic hopes that enthusiasm for such bigotry will flag

Like most students in a new flat, Arvan and his flatmates set about making their mark on their home. In mid-January they hung a pride flag on the edge of their property.

Within a fortnight, someone tried, and failed, to burn it and then tear it down.

To Arvan, the failed attempt is laughable. He said, “It makes me laugh to think they’ve [burned it] in two places, then tried to rip it down, but didn’t succeed, because we’ve tied it up too securely”.

“We’re just gonna keep this up until it gets completely destroyed and then we’ll replace it. Maybe we’ll put two of them up.”

No one in the flat reported it to Campus Watch, as they didn’t believe anyone would be able to find the culprit.

Deputy Proctor, Geoff Burns, told Critic that Campus Watch could have helped. In a case like this, they could have increased Campus Watch vigilance in the area of the flat, asked staff to review CCTV footage, or provide advice like checking flat security.

“We want to help people in our student community to feel safe,” he said.

The Deputy Proctor added that he would still very much welcome the people concerned to speak with him, confidentially if preferred.

For now, the burned flag hanging from their flat is an aesthetic. As Arvan said, “It’s symbolic [and] pretty badass. We’re pretty proud of it”.