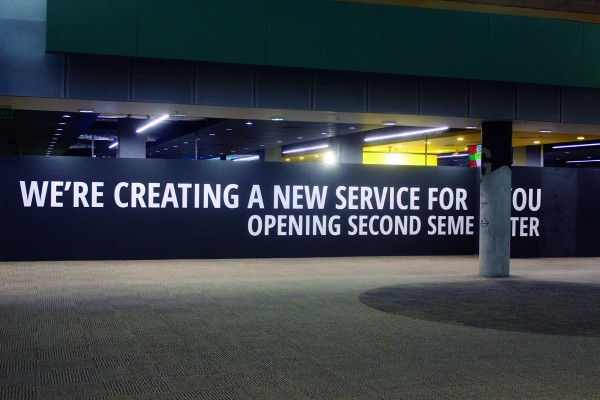 Behind the Wall of Lies lie yet more questions

The Black Wall of the lie-brary. Who can remember when it came, that impenetrable eternal Wall. A computer lab is lost in the golden lake of memory and all that’s left is the Wall, flashing cryptic messages from our masters. WATCH THIS SPACE WE ARE CREATING A NEW SERVICE FOR YOU OPENING NEXT SEMESTER WE WILL NEVER DIE.

And then it was all over. AskOtago, that was the answer to the riddles, to the nightmares, to all the misery and all the pain.

“I’ve only got one thing I want to ask Otago,” one student told Critic, “where did all my money go?” As is becoming a recurring theme, AskOtago was once again the answer.

Presumably AskOtago will be a service where you go and ask a question and Otago gives you the answer. Like the internet, but only containing Otago-based information. Critic’s first question will be “If the Archway and Burns buildings were both transformed into bats, which would win in a race?” This will be a test, as we already know the answer.

Or maybe Ask is an acronym for Actually Something Kool. After all, no one would be so cruel as to hype us up this much only to give us a new administrative service and not something kool like a waterslide or a skatepark or Avril Lavigne.

Or maybe this whole thing is a trick, a ruse. Maybe AskOtago is just a front for another, more sinister operation. After all, the Wall was up for a million years, and how long does it take to build some desks and chairs? We don’t know.

Maybe the Black Wall of Ignorance is not only on the ground floor of the Central Library; maybe it is also in our hearts.

Maybe we should all go to our rooms and think about what we’ve done.