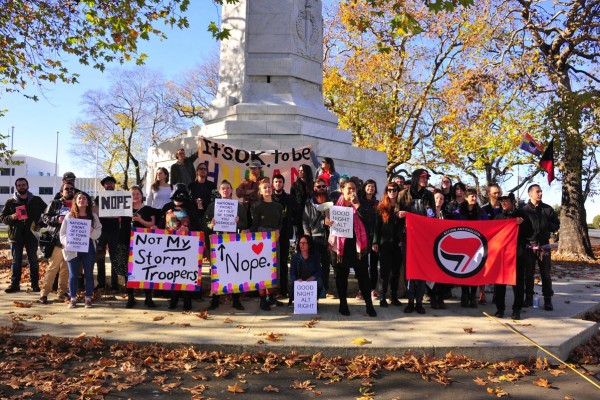 The National Front forced to wave the white flag of surrender

The National Front, a white supremacist, alt-right group, held a sparsely attended meeting at Queens Gardens on 4 May. The event was heavily counter-protested.

The National Front is a group of racists that claim to encourage free democracy for New Zealanders, in which individuals are free to make their own decisions and choices, as long as that choice is to be racist. This seems oxymoronic, emphasis on the moronic, and the National Front evidently doesn’t understand our current form of government. Their website states “Unlike other parties, particularly those of the extreme left and right, we would not impose our views on the population”.

A video from a recent Christchurch National Front event shows a white man talking to about 7.5 other white people at a nondescript outdoor location.

After a complaint, the National Front’s events were quickly removed from EventFinda and their account was suspended. EventFinda CEO James McGlinn said that they do not allow content that could be seen as “promoting racial disharmony or hate speech”.

Critic spoke to Sina Brown-Davis, who described themselves as “of Te Roroa and Te Uriohau descent, a lifelong activist, humbly living on the land of the Kai Tahu, Kati Mamoe, and Waitaha people in Parihaumia,” about her involvement with the Dunedin counter-protest.

“[We] should make sure that white supremacists should never be given a platform anywhere. They can make an effort to learn about the Māori history of the land that they live on and be supportive allies of the Tangata Whenua. They can hand over resources to minority groups that are discriminated against. Make an effort to understand racism, colonialism, and all the impact it continues to have in our country.”

Another member of the counter-protest said “I think one of the most important things is having these tough conversations about race and racial injustice.

We need to understand that these people play on very real fears that people have about the present and the future, as well as the reactionary or racist attitudes which are seen as accepted more or less in today's society.”

The National Front did not respond to our request for comment.