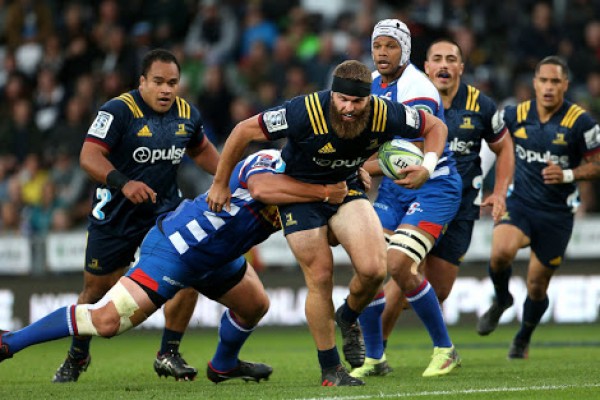 Landers Get The Job Done At The Glasshouse

Getting into the third week of the year, the Freshers were starting to realise they actually had to do some sort of work at Uni, and they were absolutely fizzing for some code and a couple of Tri-Stars in the Zoo come Friday night; and boy did the Landers provide for them.

Having seen how the Crusaders rattled the Stormers last week in the early stages with quick ball movement and ruck clearances, newbie in the hot seat Aaron Maugerhad the Landers adapt the same game plan; and it paid dividends after 4 minutes, when Tei Walden broke the line and drew the final defender, to put former mullet man Liam Squire in out wide for an early 5-0 lead (bring back the mane). Squire’s already devastating ball carrying has had an increased load from last season, which is making it even more difficult for defences to re-gather after his carries. He really is looking like the man to take the All Blacks’ 6 jersey from Jerome Kaino.

The Stormers gave the homeboys a lucky break after 7 minutes, when young gun first-five Damian Willemsedesperately stretched out when tackled just short of the line and lost the ball. But the Stormers continued to apply relentless pressure, and lock Chris van Zyl crossed the line after 10 minutes. Fullback SP Marais (8/8 for the season) missed his first kick of the season and we were tied at 5-5. After doing all the early mahi, however, Rob “Bobby T” Thompson gave the Stormers the treats, throwing an errant pass and Willemse dashed 80 minutes to dot down. Marais nailed the conversion and the lads from Cape Town took a 12-5 lead. At this stage, there were slight concerns that the noticeable change in the Highlanders style of play, from the kick-and-press style of recent seasons to a more fast-paced, catch-and-pass style was proving a hard adaptation.

Those concerns were quickly vanished, however, as the Landers we’ve all come to know and love at the Glass House came out to play, when after 19 minutes, the crowd favourite Waisake Naholo skipped past four men down the left flank, and fed it inside to Aaron Smith to stroll over in front of a Zoo fizzing to some Seven Nation Army. Lima slotted the conversion and we were all tied up at 12-12. 22 minutes in, Stormers winger Raymond Rhule caught a deft box-kick and looked set to go in under the posts, before Captain Fantastic Bender just did Bender things, and made a try-saving tackle. How he did it I still have no fucking clue. He then turned the ball over and got the Landers a penalty. I love you. Bender. Then, the Stormers built up 11 phases and applied the blowtorch around the 30-minute mark, winning a penalty around 40 metres out for a no-arms tackle from SiateTokolahi. Certified boomfa, and rightly escaped a yellow card. Marais nailed the resulting penalty and the away side went up 15-12 towards the end of the first stanza.

That lasted next to no time, though, as the Landers went right back down the right flank through Bobby T, who passed it back inside to the man of the hour WaisakeNaholo to dot down under the posts in front of a steaming Zoo. Lima converted and the homeboys went back up 19-15. Nuggy was fizzing like he was back in Christchurch. At this point, I was honestly starting to get some serious whiplash watching this game.

When Tei Walden broke up the middle after the halftime hooter and dropped the inside pill off to Bender, it looked like the lads were in for all money. Bender was tackled and released, going in under the posts, but was called up for an apparent double-movement. I always thought Glen Jackson was a fuckwit, and he definitely hasn’t changed that here. That was all she wrote for the first, and we went to the orange break with the Landers up 19-15.

The Landers came out absolutely hissing, and appeared to be in under the posts for all money after 43 minutes, before Hemopo absolutely shat the bed by dropping the ball under the posts. The boys kept that snake caged and continued on hissing, with Luke Whitelock storming over after 47 minutes. Lima “There’s Only One” Sopoaga put it between the sticks and the Landers went 26-15 up. Bobby T has well and truly continued his confident start to the season, running brilliant lines and putting some smart kicks in behind the opposition backline.

On the 60-minute mark, the Stormers started to apply some pressure to the Landers line, but it came to nothing as newbie Tevita Nabura picked up the Stormers ball carrier and manhandled him into a free kick. The Southern men then botched another sure thing, when Nuggy broke free and jigged his way towards the line in the Stormers 22, before throwing a pass just forward to Naholo. Unluggy.

A major struggle for the boys last season was missing out on bonus points in games where they really should’ve nailed them, and it was looking like an eerily similar situation tonight. But then, on the 78-minute mark, the Landers played some brilliant intuitive rugby down the right flank, with slick interchanges between the two Smiths, Naholo and debutant Tyson Frizell putting Aaron away under the posts. Lima converted and the boys were up 33-15 to clinch the fifth point.

The two Smiths and Liam “Squiddy” Squire were the standouts for the Highlanders, with try-scoring machine Naholo doing the do as well. To put it plain and simple, Sumo Stevenson nailed it when he said, "Aaron Smith is the car parker, he always ends up finding space", while Bender looks like he’s back to Godly levels after his time off in the second half of last year.  A shout out also to the new midfield pairing of Walden and Thompson, who are making it look like Fekitoa won’t be missed at all. On a side note, young first-five Willemse looks like a future superstar for the Springboks.