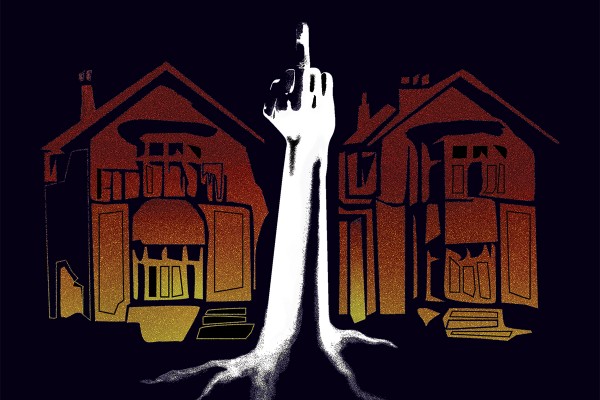 In 2016 eight girls signed a flat with Mike Harbott at 41 Gladstone Road. He told them that the property was being renovated but that the renovations would be complete well before the end of the year.

Many of the renovations were not completed. There was no source of heat, no ventilation in the bathroom, the front windows and doors were not sealed, and there were no functioning smoke alarms, among other things. The tenants said Harbott gave them deadline after deadline for completion of the construction work. “He was always giving us false dates when he knew he was never going to be able to finish it.”

The girls ultimately took Harbott to the Tenancy Tribunal, to claim compensation and force him to complete the work needed to make the house liveable.

It was also revealed that the landlord didn’t lodge their bond until 15 March. Failure to lodge a bond within 23 days of payment is an unlawful act.

At the Tribunal the Judge ordered Harbott to pay the tenants $4,570 in compensation for “being unable to use the premises from the beginning of the tenancy,” for not maintaining the premises “in a reasonable state of repair,” and for intentionally failing to lodge the bond. In addition, Harbott was ordered to complete the repairs and renovations by 31 July. The tenants’ rent was to be reduced by $100 per week until the 31st, and reduced by a further $100 per week if the construction was not finished by that time.

Harbott then went directly against the Tribunal order and informed the girls he could not pay compensation or complete the construction. He also tried to trick them into paying full rent by claiming that their landlord had been changed to a company, Gladstone Road Ltd., and that because the order was against Mike Harbott not the company, they had to pay full rent. The girls assumed that because Harbott was a part of the company the order still stood. “When it was convenient to be a business partner [in Gladstone Road Ltd] he was and when it wasn’t convenient he wasn’t,” said one of the tenants.

When the tenants asked for their compensation Harbott sent them manipulative messages claiming he was “prevented a fair case” at the Tribunal, before stating that he couldn’t pay them the money he owed them because he gave all his money to poor people in Cambodia. “They needed my money well more than any of us do. While to each of you, we’re talking about $500 each, I was seeing $500 as enough to provide the tools, material, and seeds to bring a family from the brink, to sustainable and the fact I couldn’t give that when I lost against you made me sick to the stomach. So I decided to do it anyway and spent my money on them, hence me now having no money,” going on to say that “at the time and in the moment I resented you all for trying to take away my ability to do good for people that really desperately needed it.”

“Every message he sent made us feel that we were in the wrong; we would feel like maybe what we’re doing isn’t right” the tenants said.

The girls said that while the property was “liveable when the sun came out,” once winter started it was a different story. There was no heating source in the flat the whole year, and the windows and doors weren’t sealed, or had cracks and holes, which led to mould growing on the unventilated bathroom ceiling and on the carpet. “The mould started growing inside the dew droplets; microbiologically it was quite fascinating, but not to live in.” The tenants said they were “sick for the whole of winter, just a continuous cough”.

One tenant was hospitalised with an undiagnosed respiratory illness, which doctors suggested could be related to the damp flat. They advised her to move out of the flat.

Harbott told the tenants he would pay them the compensation only once he’d sold the house, and refused to meet with them to discuss it if they brought their OUSA Student Support advocate, saying in a message “I find the idea of meeting with you all unpleasant enough, so will not be meeting with you all + an advocate – 8 [vs] 1 is bad enough”. He went on to tell them “there are some of you I frankly don’t think deserve my time”.

Mike is yet to sell the property.

When Critic reached out to Harbott for comment, he confirmed that he had still not paid the compensation awarded.

However, he disputed the Tribunal ruling, claiming the property was “liveable” from the 4th of January. He also made the potentially defamatory statement that one of the girls “lied” to the Tribunal about him promising to install a fan.

The Tribunal actually never specified that he must install a fan, only that he must “fix ventilation in downstairs bathroom,” the one that was growing pink mould.

After being contacted by Critic, Harbott said he had threatened the girls with legal proceedings if they were to “tarnish my name”.

While Critic was looking into the claims made by the flat of girls, another flat, 30 Warrender Street, who also had Mike Harbott as their landlord, approached us.

This flat of seven boys had an eerily similar story to the girls. The flat was also supposed to have renovations completed before the end of 2016, but these were still ongoing when the tenants moved in. Over the course of the year Harbott did not complete these renovations, or fix parts of the flat that were damaged in the course of normal wear and tear, including a leak in the bathroom that the tenants informed the landlord about, but was never properly dealt with, resulting in rot causing serious damage.

Like the Gladstone Road flat, Harbott also failed to lodge the Warrender flat’s bond on time, but in this case he never lodged it at all and admitted to using it for personal expenditure.

At the end of the year Harbott told the tenants that because of damage caused to the property they had to pay him $9040, saying that he “has to be more mean to those students who haven’t been taught respect”.

The tenants accepted responsibility for some careless and intentional damage, which they believed that their bond would cover, but rejected a large part of the damage as being normal wear and tear not fixed by the landlord when it was brought to his attention.

At the Tenancy Tribunal, Harbott lost and was ordered to pay the tenants $1700 in compensation. He has, as of yet, not payed this.

The boys at the Warrender flat also provided us a message that Harbott sent a third flat, 9 Duke Street, when that flat wanted to go to Tribunal.

“That process would be more painful for all of us, it’s an awful process and everything is kept on record, so while I’d be a grand down, each of your names would be tarnished just because you went there. I follow a similar procedure as many property managers and check everyone’s history with tenancy services and regardless of the tribunal outcome if any applicant has been to the tribunal I decline the application. I decline it regardless of outcome.”

Critic leaves it up to the reader to decide whether or not this is blackmail.

In a 2017 article on landlords.co.nz Mike Harbott said he owned 7 large student flats in North Dunedin. Each of his flats appear to be owned through different companies, although Critic was able to identify 859 George Street as one of his other flats. He also may be involved with 16 Wairoa Street.

OUSA President Caitlin Barlow-Groom said, “Talk shit get hit (by the law) I say. Landlords have been taking advantage of students for years and it is completely unacceptable. I encourage everyone to stand up for what is right and to not be afraid to ask your landlord to sort their shit out.”

Both of the flats who went to Tribunal emphasised the invaluable role OUSA Student Support played in getting successful rulings from the Tribunal.