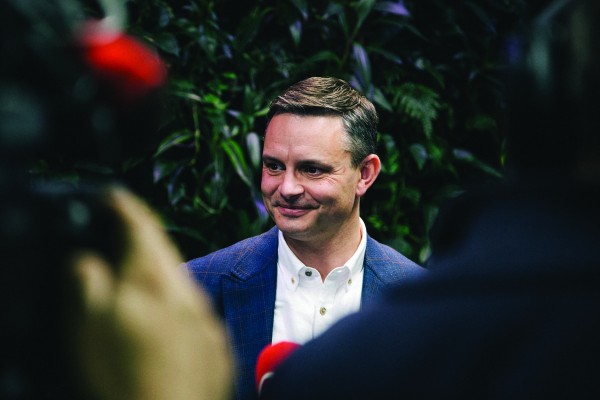 After losing his co-leader just before the 2017 general election, James Shaw was tasked with leading his party alone on a quixotic journey from outsiders to governors. Rather than riding in on a green wave, the party limped across the line, just squeezing above the 5% threshold required to keep their parliamentary dreams alive. While not the result they would have hoped for, it was enough to take the Greens where they had never been before – government. We caught up with James almost 5 months into the new job, just as his party launched their campaign to find him a co-leader.

Critic: Let’s start with the basics. What undergraduate degree did you study?

James Shaw: Well, I think it is probably a bit of an overstatement to say that I studied anything to tell you the truth. I did a Bachelor of Arts at Victoria University, but then I went overseas with a student exchange and ended up moving to London and getting a job. So I actually ended up not getting my undergrad, but then I got my postgrad Sustainability and Business Leadership, which I know is counter-intuitive if you don’t have an undergrad.

C: In those days as a student at Vic, did you imagine yourself as the leader of a political party?

C: What are your best memories from your student days?

J: Well, I can’t remember a lot of them which probably tell you something. I had the opportunity to travel as a student so that really was a mind-expanding set of experiences which I wouldn’t have had if I hadn’t been at university.

C: Was that a turning point that led you on to a political path?

C: The Green Party has a number of policies focused on students. Why do you think it’s so important to make being a student and having those experiences accessible?

J: Students have really been squeezed over the last ten years. Even just the ability to do the basics and get your degree has been eroded because people have been struggling with accommodation, getting access and the costs, as well as other living costs. That makes it very difficult even just to be a regular student, let alone if you also want to have this richer experience that university has to offer. So, we have had emphasis on making sure that the first thing we pay attention to is that people have got their living costs and to just make that a bit easier on people.

C: The Green Party has spoken out a lot about mental health – in the election and in the coalition agreement.

J: Mental health issues are at virtually epidemic levels across New Zealand and students are impacted by that too. The reason why people are really feeling the strain and it is affecting their mental health is because of the burden of trying to make ends meet, and get all the other stuff in life done as well - whether you’re a student or a parent or a homeowner, whatever it is, people are really being squeezed so it is a focus of the Green Party and this government to try and alleviate that.

C: Moving into Government is obviously something new for the Green Party. You haven’t been in Government before, so perhaps in a sense the Green Party’s never had to compromise on its vision and has been able to keep its hands clean. How do you see that playing out in this coalition government?

J: I don’t think we have to compromise on our vision in government. If anything, this is when we actually get to enact our vision. We don’t get to enact all of it of course. We’re able to enact a portion roughly relative to our size in Government. We’re in this three-way relationship where, in order for anything to happen, we need to proactively support each other.

C: How do you see that being communicated to the average voter who might think ‘why did the Green Party support this, I thought that they had different values?’

J: That’s a good question. There’re a couple of things, one of which is that we chose to go into confidence and supply rather than full coalition and that gives us the ability to point out where we have a different view from the government on things. If you like, that’s a bit of a safety valve. We can say look, we are supporting a government that is doing the following, we don’t actually agree with it, but we continue to support the Government because on the whole it’s doing stuff that we do agree with and in fact quite a lot of stuff that we actually get to do ourselves. The ability to communicate that message is important. I realise it is a bit nuanced, but it is different from Cabinet responsibility where you basically have to stay quiet about anything you disagree with.

C: We’ve got some history in New Zealand of minor parties being swallowed by working with larger parties. Are those processes of communicating with your supporters going to be how the Green Party tries to guard against that?

J: Yeah that’s absolutely right. We’re very aware of it and it’s one of the reasons we’ve been cautious about going into government. When you look at it, every single other support party, other than New Zealand First, has disappeared and I’m a big believer in having a pluralistic Parliament so we don’t want to be roadkill along the way.

C: We’ve even seen that pluralism shrinking in this five party Parliament.

C: What’s the policy that you’re most excited about?

J: Well I’m biased of course because I’m the Minister for Climate Change, but I’ve got to say that the Zero Carbon Act is the thing I’m most excited about. So, we’re going to put into law the target of becoming a net zero emissions economy by the year 2050 and setting up an independent Climate Commission to help guide us there with five-year carbon budgets and policy proposals and so on. I think if we can do that then we’ll have put in place the key architecture for the transition to the low carbon economy for the next few decades. For me it’s all about these big, difficult, long-ranging problems rather than the more immediate stuff that often distracts government.

C: Last question I have to ask, Speight’s or Tui?

J: Also I could say Garage Project because that’s my local, but given I only have two options I’ll go for Speight’s. I drank plenty of that at university.