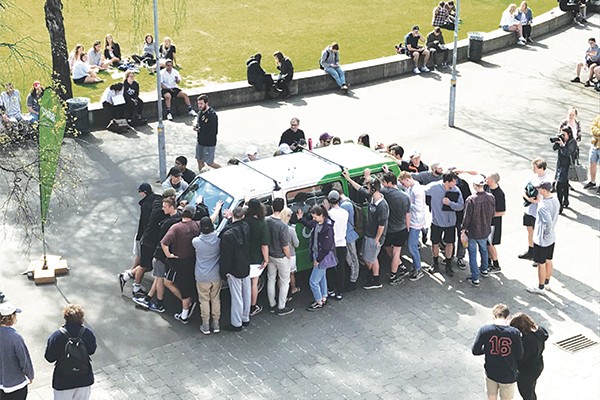 OUSA Give Away Van For One Year After Lengthy Competition

Otago Student Will Bowsey is the proud new owner of a van for the next year, after winning ‘The Great Silver Bullet Giveaway’ last Tuesday. He will receive a free 12 month lease on the van, fully covered by OUSA insurance. The OUSA branding will be removed.

Contestants had to keep at least one hand on the van at all times, with the last one still touching it declared the winner. However, the format of the contest changed drastically throughout the day as the contestants proved more dedicated than the organisers anticipated.

The contest ended after 10 and a half hours, but not a single person was eliminated after giving up or taking their hand off the truck. As the hours dragged on, OUSA President Hugh Baird, who organised the event, introduced a series of challenges to cull the field.

First, competitors had to hop up and down on one foot until one was eliminated. Then they were made to perform wall sits, then stand on tip toes. A footrace to UniCol and back eliminated the last runner to return. As night fell, a series of quiz questions cut the number of competitors in half. One girl was seen leaving in tears after answering a trivia question incorrectly seven hours into the competition.

The winner was decided by a shoot-off quiz of five questions each. Baird said the pressure at the end was immense, “I was sweating, I was so anxious for the person. It got real heated late in the night; everyone’s mates came along and were screaming at them. I felt so bad kicking people off after 10 hours.”

The decision to run the competition in the first place was controversial, and generated heated debate at Tuesday’s executive meeting. Colleges Officer James Heath claimed that the executive wasn’t given the chance to have their say. "We weren't told at all [about the contest]… it should've been brought to the Exec.”

Te Roopū Māori Tumuaki Eli Toeke thought giving away the van was a waste of resources, saying, “it should have been offered to Te Roopū Māori to use”. It was also suggested that Radio 1 or other OUSA clubs could have utilised the van.

Hugh Baird admitted that the competition could have been better run. “It was poorly organised,” he admitted to the executive. “It crept up on me. I had been wanting to do this all year. I’d said that earlier in the year, but I only realised it was happening about a week ago.”