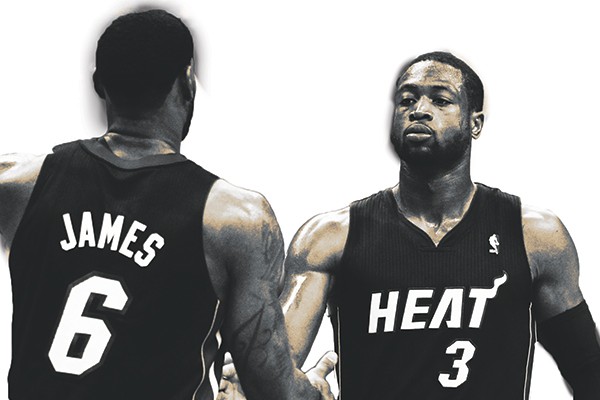 When Does Super Become Anything But?

The Rise of Super Teams in the NBA

“In this fall, this is very tough, in this fall I'm going to take my talents to South Beach and join the Miami Heat.”

On 8 July 2010, LeBron James altered the NBA landscape. Not in any minor way – he does that on a daily basis, but in a significant way that we are only truly starting to notice today. By joining fellow All-Stars, and potential fellow Hall of Famers, Dwayne Wade and Chris Bosh in Miami, ‘The King’ reignited the super team trend, which began long before his time. He drastically altered the structure of the league.

The scene was truly set for domination in 1968 with Wilt Chamberlain’s move to the Lakers. Unlike LeBron’s move, Wilt simply wanted out of Philadelphia. Funnily enough, this ended up with an undisputed Hall of Famer teaming up with two more, Jerry West and Elgin Baylor. Just as Golden State have ended up with Curry, Durant, Thompson and Green on the same team through different circumstances, the difference is not in the ‘what’ but in the ‘how’.

This provides us with a simple methodology for defining a super team – multiple Hall of Famers on the same team, with at least one coming to join the others; the team they combine forces with already being reasonably successful, and; the balance of power in the NBA being at threat.

Fast-forward to the early ‘70s, and the trend continued in Milwaukee. 1970-71 also saw the creation of a Milwaukee super team featuring Lew Alcindor and Oscar Robertson, whom the Cincinnati Royals traded to Milwaukee without explanation and for little in return. The 66-16 Bucks won the championship in the duo's first year together and made one more Finals before Abdul-Jabbar headed to the Lakers. That Robertson is linked with one of the earliest super teams is a striking coincidence. Player movement was limited by archaic rules that put owners and teams first for much of the NBA's existence. Robertson's legal challenge of the Association in the 1970 antitrust suit Robertson vs. National Basketball Association paved the way for restricted free agency in 1976, which slowly evolved into the modern free-agent structure we know today. The other historically distinct super team are the 1982-83 Philadelphia 76ers, boasting Hall of Fame residents Moses Malone and Julius Erving and All-Stars Maurice Cheeks (outrageously snubbed by the Hall of Fame), Andrew Toney, and Bobby Jones.

The history of the NBA super team enters murky water after 1983. Unrestricted free agency was in full swing by the mid-'90s, but no star had the audacity to shout, "If you can't beat them, join them". Then 34-year-old Charles Barkley left the Phoenix Suns to join Clyde Drexler and Hakeem Olajuwon with the two-time champions Houston Rockets. Although Barkley wasn't quite in his prime in 1996, he was just four years removed from an MVP season and averaged 19.2 points and 13.5 rebounds for the Rockets.

Indeed, the Barkley Rockets — and the 2004 Los Angeles Lakers featuring Karl Malone and Gary Payton — serve as a bridge between the historical super teams and those of today's era. Both squads straddle the line between super teams built on the backs of Hall of Famers and your run-of-the-mill ring-chasing.

For that, we should blame Michael Jordan.

Before ‘His Airness’ locked up a perfect 6-for-6 Finals record, NBA greatness was an open discussion. Jordan changed all that. In his wake, retiring without a ring meant you were borderline worthless no matter what other success you had.

We'd put that pressure on great players before, sure, but Jordan's success amplified the criticism — paving the way for the Boston Celtics to unleash the full force of the super team model. Boston's trades for Kevin Garnett and Ray Allen constituted the first truly modern superteam, as they joined Paul Pierce and Rajon Rondo and made a mockery of the Eastern Conference.

Once the floodgates opened, there was no stopping the trend. LeBron didn't start the NBA's love affair with super teams; he merely made it acceptable.

People can fire blame at this generation all they want, but super teams aren’t a modern phenomenon; the execution of producing one has simply changed over the years.

We've gone from a rare superstar looking for greener pastures once a decade or so, to Hall of Famers trying to preserve their legacies, to the game's best players taking the easy way out at their peaks, all in the unending pursuit of rings. Jordan’s dominance in the Finals has lead to an all-or-nothing, short-term mindset, with sheer disregard for the long-run. The harsh reality is that it has to be that way – when players are going to be judged on how many rings they finish their careers with, they’re making the only logical choice to secure their legacy.