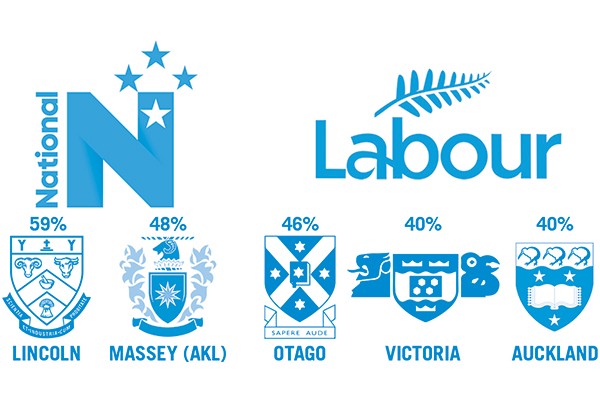 Labour Overwhelmingly Takes the Other Eight

With the General Election now over and provisional results in, we have a wealth of data on the attitudes and politics of the nation’s cities, towns and suburbs.

The results from the nation’s university campuses provide an interesting snapshot of party preferences, and some of the results are surprising.

Lincoln University describes itself as New Zealand’s specialist land-based university, which may explain the strong showing in the Christchurch-based institution for National. Indeed, the party received 13,000 more votes than Labour in the Selwyn electorate, where Lincoln is located, highlighting their domination across the region.

The Green Party managed to edge out National in both of Wellington’s universities, winning Massey University’s Wellington campus and Victoria University by approximately 20 percent apiece. At the University of Auckland, the Greens trailed National by just 0.18 percent, as Labour, who were victorious, fell just shy of 40 percent.

At Otago University, the Greens pushed National for second place, losing out by just under 3 percent, as Labour took 47 percent share of the vote (see Joel MacManus’ article below for more on the University of Otago’s specific polling booths).

The Opportunities Party captured the youth vote most sizably at the University of Canterbury where they gained an 8 percent vote share, despite getting just 2.2 percent nationwide.

The overall result from university campuses had Labour in the lead with 39 percent, National on 31 percent, and the Greens on 19 percent.