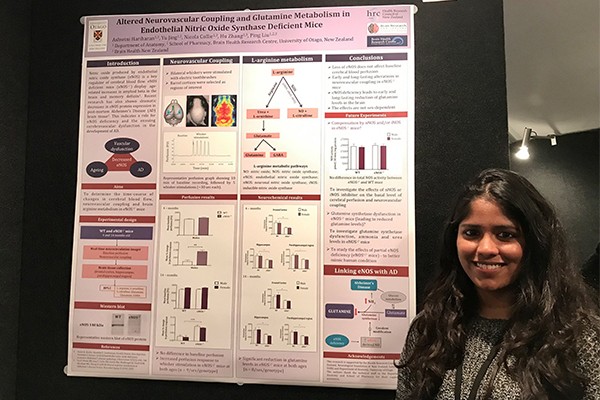 Hariharan’s research is in brain vascular dysfunction; problems in brain blood flow and how it can be a trigger for late-onset Alzheimer’s.

Hariharan is working with Associate Professr Ping Liu in the Department of Anatomy. “There’s a lot of new work being done [that is taking] the focus away from the traditional Alzheimer’s hypothesis, with more and more research on problems with blood flow and vascular problems being an underlying cause for brain diseases.”

Previous research on Alzheimer’s has often centred around the amyloid cascade hypothesis, which is the protein deposits in the brain. This hypothesis is being challenged by new research suggesting amyloid beta may be secondary to some other process in causing late-onset Alzheimer’s disease.

“Lifestyle factors and vascular problems are coming into the light more,” Hariharan said.

She explained that the research is, “very preliminary right now, but just getting more answers towards why aging can cause dementia”.

Hariharan did her Masters in Pharmacology, where she started her research in brain disorders before moving to Alzheimer’s for her PhD. “It’s quite a novel project I got into, and it’s exciting.”