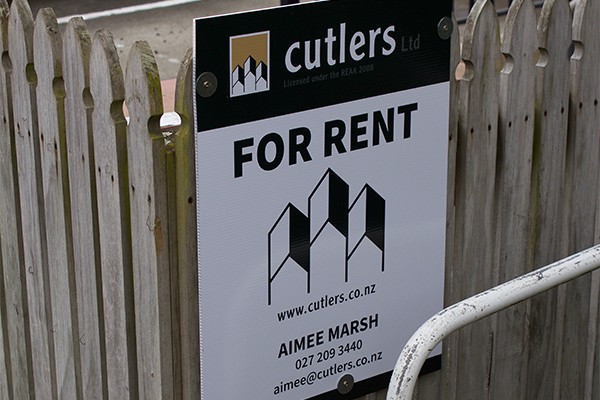 Cutlers Ltd, one of the largest property management firms in North Dunedin, appear to have, in at least one case, required tenants to sign fixed-term contracts, when the law allows tenants to terminate their tenancies after giving only 48 hours’ notice.

Tenants at 63/A Queen Street signed fixed-term contracts for 2017 as if they were studio rooms, despite the fact that their rooms did not meet the legal requirements to be considered studio rooms, and instead should have been considered a boarding house.

Boarding house tenancies are not for a fixed-term period and can be terminated by the tenant at any time, providing they give 48 hours notice to their landlord, but Cutlers had tenants sign contracts which would appear to lock them in tenancy for a full 12 months.

63/A Queen Street is listed as “ideal for students with a lower budget who have set their sights on a studio room”. It has 11 rooms, each of which are let out individually, with shared laundry and main kitchen facilities.

In most cases, a tenancy of this nature is considered a ‘Boarding House Tenancy’, as opposed to a ‘Standard Tenancy’, which is how most flats are leased. Tenancy Services states on their website that, “In a boarding house, a tenant rents a room, rather than the whole house. They share facilities such as the kitchen and bathroom with the other tenants. A boarding house is occupied, or intended to be occupied, by at least six tenants at any time.”

Dr Bridgette Toy-Cronin, Director of the Legal Issues Centre, pointed out that a studio room must have self-contained toilet and kitchenette facilities. According to a current tenant at 63/A Queen Street, they do have ensuite bathrooms, but the only cooking facility in their rooms is a plug-in hotplate. This doesn’t meet the legal requirements for a kitchenette, which must have a minimum width of 1.5m and have both boiling and baking facilities; therefore it does not qualify as a studio room.

Earlier in the year, Critic was anonymously sent a package of Tenancy Tribunal decisions for flats which had been declared to be boarding houses. Despite the Judge’s rulings, many appeared to still be being advertised and rented as studio rooms.

63/A Queen Street was one of the properties in that anonymous package. In 2016, Cutlers sought to terminate a contract because the tenant was over $2000 behind on their rent.

The Adjudicator, J. Wilson, dismissed the application because “on the face of it the tenancy appears to meet the definition of a boarding house”. It wasn’t necessary for the Tenancy Tribunal to get involved, because a boarding house landlord can end a tenancy within 48 hours written notice if the tenant fails to pay overdue rent within 10 days of receiving a notice to do so.”

Earlier this year, Cutlers sold the property to another firm, Weta Capital Property Management, for $1,350,000. The listing read: “This property caters to the needs of the majority of prospective studio room tenants, with a net income of $8000 per month for 2015 this would be a great addition to any portfolio.”

“If we do not go through with the redevelopment, yes under [the] tribunal ruling, 63A Queen St is a boarding house which allows tenants to leave with 48 hours notice.”

When asked if they could provide us with a copy of the current contract, they said that Cutlers were still managing the property.

A current tenant at 63/A Queen Street provided us with a copy of their contract, which they signed with Cutlers at the beginning of the year. It included the clause, “The tenancy shall commence on the 09/01/2017 and shall be for a fixed-term and cannot be terminated with notice and will terminate on 31/12/2017.”

At no point was the tenant made aware of the fact that they were living in a boarding house and had the ability to end the contract whenever they wanted.

“I would say it’s most of the landlords in the area, but of course, you don’t hear about the good ones.” OUSA Student Support has been working with different organisations to make sure properties are advertised correctly. “They need to be advertised as boarding houses or flats, because otherwise it’s deceptive.”

“For any students who thinks they are in a boarding house on a fixed-term contract, we ask them to get in touch with us. Just because you signed it doesn’t mean you can’t do anything about it. The law supersedes any tenancy agreement, a tenancy agreement cannot be inconsistent with the Residential Tenancies Act.”

Critic sought comment from Cutlers over whether they consider the property they manage a boarding house or a studio room, but did not receive a response in time for publication.