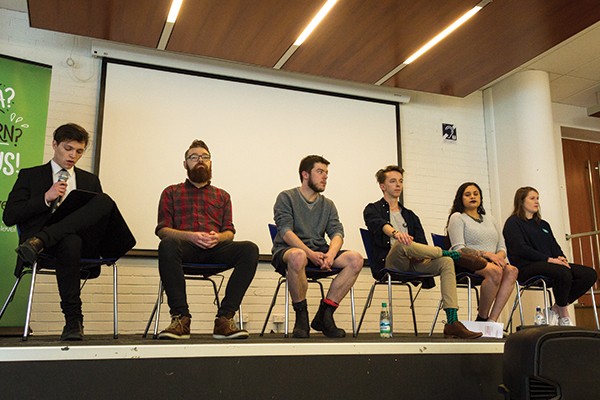 The OUSA Executive Election Forums that were held last week provided a slightly larger and more invested crowd than usual, and a surprising amount of insight and conflict.

Predictably, given the lack of advocacy by this year’s executive, all of the candidates pledged to increase their level of advocacy should they be elected. A fire alarm interrupted the forum 20 minutes in, causing the evacuation of the Union Hall, which Critic thinks was deliberately triggered by Vice Chancellor Harlene Hayne to prevent students realising their true demographic power once more.

When the audience and candidates returned, OUSA President Hugh Baird, who was moderating the event, said that “OUSA is not a dictatorship, although I wish it was at times,” however, even with absolute power, he probably still wouldn’t take a public stance on anything of importance.

Lync Aronson was adamant that withdrawing from the New Zealand Union of Students’ Associations (NZUSA) would benefit the student interest, accusing it of  “organisational inefficiencies” and that it does not provide “enough bang for your buck,” despite, as he was reminded, the Labour tertiary education policy being amended due to the input from NZUSA, as just one thing they had succeeded in for students. Angus Wilson and Monique Mulholland, who are inexplicably running alongside one another for the presidency on the ‘Justice Through Solidarity’ ticket, said that NZUSA is imperative as a national voice for students, before Alex McKirdy told Aronson that $3 per student was a worthwhile sacrifice for what the association provides the national student body.

Following a series of questions from Baird about their managerial competence (which thankfully granted Aronson the opportunity to describe himself as a “social chameleon”), the group were asked what their biggest criticism of the 2017 executive has been thus far. Finn Shewell considered mental health to be the most significant issue OUSA has failed on, and said they could do far more on the issue, before Aronson reminded the crowd that his ‘Free Food Fridays’ policy would help to alleviate stress and improve students’ mental health. McKirdy also agreed with mental health, dealing in absolutes: “the whole system is not working” and claiming that “the university is working against students”. Barlow-Groome noted that housing conditions were particularly bad, tying them into the issue of mental health. Wilson and Mulholland disagreed, believing the “largest cuts to staff in history” and financial difficulties for students were the most pressing issues that have been ignored respectively.

The Hyde Street Keg Party, which Aronson will remove OUSA involvement from should he be elected, was touted as the largest success of OUSA by McKirdy, Mulholland, and Barlow-Groome, all of whom reiterated their support for the event. Shewell came out of left field and said the Kiwiana 101 Reorientation event proved extremely popular, and provided an “experience of New Zealand for international students,” before Wilson said Orientation Week was a show of how “we are a force to be reckoned with,” and Aronson answered student support, a service he will provide increased financial support to if he is successful.

A question directed at Barlow-Groome, due to her being the only candidate with any previous OUSA experience, elicited a pledge to “stand up for things and not allow the status quo to continue”. Shewell told the crowd that the “reason we’re seeing candidates with no experience getting through is that maybe it is actually a good idea, and maybe OUSA is actually doing a good job”.

The financial independence of the association was a contentious topic, as the university provides the association with roughly $3.5 million, a sum that some worry may shrink if OUSA fights back on certain contentious issues. Mulholland was clear that she believes, “OUSA should be more independent as we are valuable stakeholders in the community,” and it would help “bring down [OUSA’s] conflicting interests”. Barlow-Groome said independence is important for the association’s future, but would not “barge in there [the Registry Building] and demand it because I don’t want to lose our funding,” a position Wilson found unpalatable, being of Union ilk, reminding her that “if we want our voices heard and it’s not something the uni want and they will cut our funding, we should become independent and fund ourselves,” collecting the money from 17,000 students instead of letting the university provide it to us. Aronson was more pessimistic, believing independence to be the right move, but said, “there’s nothing we can do, it’s a legislative change that’s required”. Finn was the only candidate who didn’t consider it feasible or even important for OUSA to become independent once more, reminding the other candidates that without the SLA (Student Levy Agreement) there’s about $150,000 left to play with, and with that all going into the executive, we’d have nothing left to spend on other things.” Instead, he’d prefer to see students “not be afraid despite the SLA and voice our opinion” regardless.