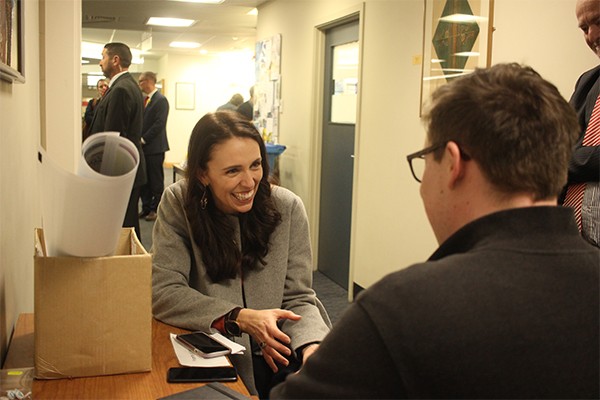 Opinion: The Wave of Optimism is Huge; That Also Means There is Further to Fall

When I asked Labour Leader Jacinda Ardern which current World leader she has the most admiration for during a brief interview while on her recent visit to Dunedin, she immediately said, “oh, if it wasn’t current, I would’ve said Obama, because what he did was extraordinary”. To me that choice was a surprising one, firstly because that wasn’t the question I asked, and so by answering she was opening herself up to inferences about her mindset, and by extension her current perception of herself, and secondly because of the hype and hope that Obama rode into the White House with in the 2008 election, only to have that instilled public sentiment, in the eyes of many millions of Americans, slowly extinguished throughout his two administrations; it’s maybe best to avoid that answer at this stage of her, at least currently, very successful campaign.

Originally, I was told I had a 15-minute slot with her prior to her speech - enough time to probe her on a few key issues but little else. Then, 45 minutes before I left, a member of Ardern’s team called me to say it would have to be after her speech because they were running late, which in turn became after her planned hospital walkthrough because of the fucking ODT hogging our collective question time; it seemed as though the opportunity was slipping away amid the chaos that awaited her at the Hunter Centre. The result, however, was that I got to accompany her and her team and see a snapshot of the behind the scenes of the Ardern campaign.

On Thursday night, the Labour Party polled their highest figure in twelve years, according to the OneNews/Colmar-Brunton poll, and most importantly leapfrogged the National Party, who received their lowest poll result since 2005. I have spoken with Ardern’s predecessor, Andrew Little, who had his highest poll result at just 33 percent (11 percent below what the most recent poll had Labour) following his speech at a packed Hutton Theatre in April this year, and that event was not nearly as impressive an event as Ardern’s Dunedin visit. On that occasion, civility reigned among the crowd and the same was to be found in Little’s responses to me. He lacked any semblance of the ‘x-factor’, whereas Ardern oozed it; he seemed to be staring defeat in the face, while Ardern didn’t seem to know what that word even meant; but most of all, I was captivated by Ardern when she eventually got to speak with me, whereas with Little, I left feeling almost robbed of my time.

The impression I got when I was speaking with her was that she appeared to be speaking total sense throughout. When I got back to the office and recapped the answers, however, they weren’t all they seemed at the time. She clearly isn’t the most capable orator in the nation’s political sphere, but in politics, a lot of the time it seems as though what is said doesn’t matter as long as the audience is captivated by the speaker, which can be done in several ways beyond their words; that was certainly the case for me during her rally.

When I told her that a criticism of Bill English is that he’s stale and boring, something that is unlikely to be said of her, and that a criticism of her is economic inexperience, something that Bill English clearly cannot be accused of, and then asked, “why should we trust you with the economy?” she spouted generic rehearsed lines about Labour’s historic prowess on that front, and that we shouldn’t be satisfied with the National Party’s fiscal efforts, because “we can do better”. When I wondered whether she agreed with a host of political commentators in describing her as a ‘torchbearer of a generation’, she said without hesitation that “I definitely think I represent a generation that feel as though they are being left behind,” an impressively confident answer. The rest of the answer was somewhat disappointing, and, if I’m honest, the rest of the answers were not expertly answered, but they were said with such compassion, excitement, and hope that I was captivated, and I suspect a lot of the public are the same. She’s a celebrity - the only political celebrity New Zealand has. That much is clear from the hordes of people (some claimed as many as 300) refused entry to the Labour Party’s Dunedin event, not to mention the crowd awaiting her inside the venue. Perhaps drop that Obama answer though (not that she needs my advice, clearly).

Critic co-editor Joe Higham sat down with Labour Leader Jacinda Ardern in a corridor of the Dunedin Hospital to chat about whether she considers herself as a ‘torchbearer of a generation’, the presence of ‘Jacinda-mania’ across the country, and her dislike for coffee.

Joe Higham: When you became Labour’s Deputy Leader in March, Labour’s position in the polls rose 3 percent, and in just 25 days as leader of the Labour Party you’ve seen a dramatic shift in the polls again, up 10 percent in your favour. Why do you think a significant portion of the country has been impressed by you personally?

Do you have any idea?

I hope it’s what I’m talking about, yeah, and that I consider myself, as much as you can be in politics, as pretty normal, but I think that within politics you can do extraordinary things.

The main criticism of Bill English is that he is boring and stale, something that you have accused him of yourself, and perhaps something that no one could accuse you of being, and the criticism I’ve heard of you is in relation to the economy, which many would suggest is difficult to accuse Bill English of. Why should the student body trust you with the New Zealand economy?

Because I have a social programme that I know I can only deliver with a stable, growing economy, so the things I want to do I can’t do unless the economy is doing well, and of course, Labour’s got a strong record on this front remember...we delivered nine surpluses, we had the strongest economic growth since World War II as a Government, and we have a record on that front, and we’ve produced a set of rules that we’ll operate by, so that, you know, that actually we cannot only continue sound and fiscally responsible economic practice, we can make it better, because some of the markers aren’t that great. People’s wages aren’t growing up with inflation, and they feel like they’re going backwards. So I don’t think we should be satisfied with and say that everything is remarkable with National, we can do better.

Some people are calling you a torchbearer for a generation, a generation of whom many are desperate for political representation or disillusioned with the system altogether. Do you see yourself as the bearer of that torch?

I definitely think I represent a generation that feel as though they are being left behind. That doesn’t mean we have to have generational warfare though, wouldn’t it be nice if everyone had a baby boomer experience? [laughs] So it just means, and I think actually the baby boomers worry as much about that generation as we do, so I think, yes, as I said in that rally, things are could either continuing to be better or them getting worse and a big part of that is the debt we burden with that next generation, you know, whether or not then it’s impossible to get into a house. And whether or not they actually, because of what’s happening with our economy, just then have to work harder, and harder, and harder to get ahead...

You have huge plans to change how tertiary education is structured and funded, but if you had to make a wholesale change to either student loans or student living cost, which one would you choose and why?

Do they have to be mutually exclusive?

In this scenario, yes please!

I think the most immediate need right now that I’m seeing from people is just their ability to live. I acknowledge that.

Right, what is the proudest moment you’ve had in your political career so far?

You know, each day on this campaign trail, when I see people motivated enough to come out I think of the possibility of what we can achieve together, so I feel like I’m reserving up my moment of pride, because it’s never going to be about me, it’s going to be about what we can actually achieve, because when you’re in opposition, it’s never at the scale you can achieve in government, so it feels, it still feels as though we’re on the cusp of a proud moment. Do you know what I mean?

It definitely seems as though you’re riding a huge wave of support, but if you had to pick one current world leader that you have the biggest admiration for, who would that be and why?

Ummm...current World leader. Because otherwise I would’ve said Obama, what he did was extraordinary. So, currently. I have a lot of admiration for the Leader of the Scottish Labour Party.

Oh...Nicola Sturgeon? [I was thinking of the Scottish National Party]

You were raised as part the Mormon faith, but you also said earlier this year that you’re now an agnostic. Does the Mormonism you were raised with still influence the values that you base your decisions upon today?

Oh look, I think it’s almost impossible to differentiate when their values you learn as a young person. Ummm, there’s some elements of that faith that some people won’t know about, like how service driven they are. That no doubt still stays with me, and probably a little bit of Mormon guilt too...

I’ve always been weary of elected representatives who are able to work such long hours and under such pressure without of coffee. What’s your go to when you still have hours and hours left to work in the day and are feeling tired and lethargic?

Ahhh, chocolate! A lot of chocolate, a lot of tea. I went off coffee when I was living in London because it was so hit and miss. I used to drink a lot, and then I…

Oh, how long were you there for?

Two and a half years! It’s much better now.