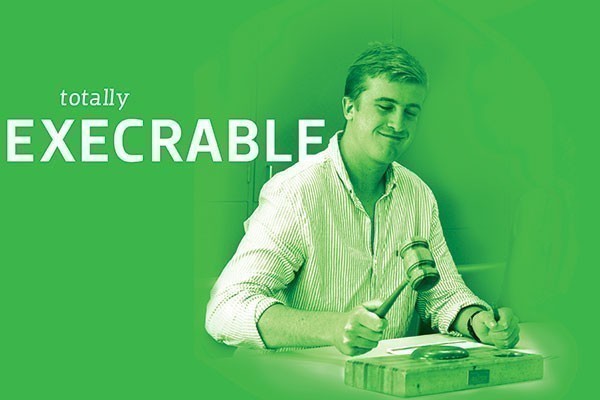 Keeping tabs on the Exec | Issue 20

One of the first things the OUSA Executive do at each meeting is to go around the group briefly detailing what they have been working on since the previous week’s meeting. President Hugh Baird, after mentioning time spent on the budget and Art Week, noted that he met with three members of Students for Environmental Action at the University of Otago (SEA) about a New Zealand government petroleum exploration permit (called ‘Block Offer’ - essentially a tendering process). The members want to lobby the University of Otago to provide a statement of support, in particular to clarify their institutional position on the issue. Baird said he will take it to the University Council meeting on 12 September but, ever the optimist, said that the plan is “going to get absolutely blown out of the water”.

He also mentioned that he was in parliament last week for the Tertiary Education Amendment Bill, and, after noting several possible changes to the Bill that he was opposed to or in support of, Education Officer Bryn Jenkins requested whether “future submissions could come through the executive please?” Baird said, “Yep,” and carried on to speak about a meeting he had with students of the School of Physical Education, of whom he said he’s “not sure they really understand the issue [cuts to the school’s staff].”

OUSA Recreation Manager Michaela Tanginetua was at the meeting to discuss the ‘Elohim Church’ - officially named the ‘Bible Elohim Academy’. The discussion was in Committee of the Whole, meaning it was an unreportable discussion (due to reasons of commercial sensitivity), but when they came out of Committee of the Whole, the group passed a motion to disaffiliate the Bible Elohim Academy for “bringing OUSA into disrepute, ignoring OUSA directives and breaching the [association’s] constitution.” For more on this decision, see page seven.

The executive then had to decide which charity to donate the money that is left over from the electronic wristbands worn by attendees at this year’s Beerfest event, which is to take place shortly after semester two exams. Although you are able get that money refunded, there is also the option of donating it to charity when you leave the event. The Executive had two options in front of them to choose from (although they were free to choose other options if they wished): Life Matters Suicide Prevention Trust and the Otago Youth Wellness Trust. University of Otago Chaplain Greg Hughson wrote to the Executive to “fully support [the] application to OUSA for a donation to be made to the Life Matters Suicide Prevention Trust”. Admin VP William Guy agreed, saying he is “happy with Life Matters too”. CEO Debbie Downs said “I could’ve presented you with more options but that’s great”. A motion was then passed to donate that money to the Life Matters Suicide Prevention Trust.

Discussion was then had over the clarification of the rules surrounding the upcoming OUSA Executive Elections. Baird said he “doesn’t know what that [agenda issue] is about,” to which Jenkins reminded him that it is to do with the recommendations by the Returning Officer (RO) in her report about last year’s OUSA Executive Election. The first of three issues was whether they should anonymise anyone’s election complaints or include their names. Baird said that he thinks they should be anonymous as the complaints are made public and thus the names will come up if potential future employers try to Google search them, which could be detrimental to their employment chances. The Executive all agreed.

The second was whether current OUSA Executive members should have to provide a disclaimer saying that they were in previous Executives alongside their candidacy profile (included in Critic and on the OUSA website). The RO’s recommendation was that they should be removed. The Exec agreed that they should be removed, and Jenkins asked “the Executive to be forthright if they sit on voting booths and support specific candidates”.

The third and final issue was in relation to whether the RO, who under clause 38.3 of the OUSA constitution is “responsible for the whole conduct of the election,” should be actively looking for breaches of the Election Policy by candidates or not. If candidates are found to have committed “serious breaches” they can have votes deducted or be excluded from the election entirely. CEO Debbie Downs said that the RO should be allowed to “stumble across something but not actively search for it”. The entire Executive agreed and a motion was passed to that effect.

Finally, Colleges Officer James Heath informed the Executive that he will be running for the position of Education Officer in the upcoming election.