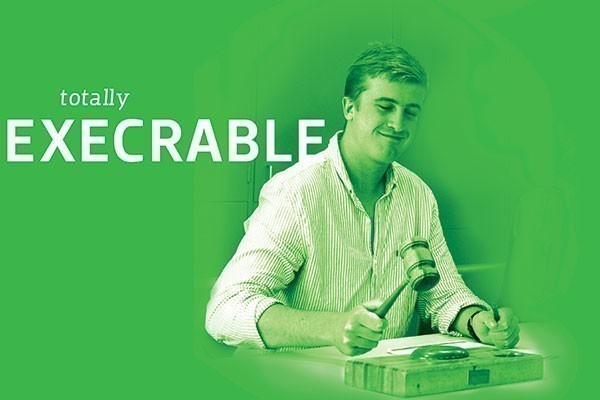 Keeping tabs on the Exec | Issue 19

After the usual formalities the OUSA Executive welcomed Student Support Manager Sage Burke and OUSA Queer Support’s Hahna Briggs, who revealed a new initiative called ‘Peer Support’. A listening and sharing experience as opposed to actual clinical advice, it will consist of ‘peer supporters’ selected from second year and above University of Otago students, and comprising a diverse range of ages, degrees, and ethnicities. The initiative will allow anyone seeking help or advice on almost any issue to be allocated a support person to help them through that particular problem. While the programme is based around emotional support, the peer supporters will receive training at the end of September, and will be required to share information with professionals in certain circumstances. Praise from Colleges Officer James Heath and Education Officer Bryn Jenkins, was followed by a question by Recreation Officer Caitlin Barlow-Groome in relation to how many people they’ll be able to offer the service to. The response, approximately 20-40 students, elicited Tumuaki (President) of Te Roopu Māori Eli Toeke to advise Briggs and Burke to “scale it up”, because Te Roopu Māori had a similar scheme that had 200 students over five years seeking help, with Jenkins agreeing with that advice, stating that “Law had 100 in one year”.

Jenkins then asked whether the implementation of this initiative will cause the scaling down of other services provided by Student Support, to which Burke said he has “asked for some money for this [initiative] in the budget, which I hope we’ll get”; Baird immediately joked, “I wouldn’t hold your breath,” due to the likelihood of budgetary cuts for the association, before reassuring Burke and Briggs that he’ll “give it a good crack”.

Baird was then elected onto the University Animal Practice and Compliance Steering Group, largely because the university were asking for either OUSA’s Education Officer, Postgraduate Officer (Lucy Northwood), or President to be appointed, and Baird said he is “happy to do it” due to the others being very busy with other Executive commitments.

Baird then spoke about a meeting he had with Student Engagement Manager Rachel Curry, who is currently heading an effort by the university to compile and collate the submissions on the university’s plan to implement 60 CCTV cameras across North Dunedin. He claimed there had been “117 submissions, or maybe 170 submissions, I can’t remember” - 75 percent in favour of the cameras and 25 percent against them. He asked the Executive which of them should be appointed to the CCTV Working Party, explaining that it was “just an extra set of eyes” to look through the submissions. Heath had concerns with this, wondering, “should they be there to make sure the process is not biased?” and Jenkins simply stated that they want “someone to do work, not help draft anything”. Barlow-Groome said she’s “honestly happy to do it” and was appointed.

A long, unreportable discussion (due to restrictions on reporting while within a period of  ‘Committee of the Whole’ because of commercial sensitivity) surrounding the topic of the OUSA Executive honoraria - essentially their remuneration for their work - lasted well over 30 minutes and at times reached decibel levels not seen at Exec meetings since last year’s discussions on the same topic. Eventually they agreed upon the pay scales for their positions, effective from 2018, which will be as follows: President: $30,270 per annum; 20 hour positions (Administrative Vice President, Finance Officer, Education Officer, and Welfare Officer): $14,560 pa; 10 hour positions (Campaigns Officer, International Officer, Recreation Officer, Postgraduate Officer, Colleges Officer): $7,280 pa. Seven members voted for the motion and three (Finance Officer Cody Kirby, Eli Toeke, and James Heath) voted against it.

With the General Election under seven weeks away at the time of this meeting, Jenkins asked Admin VP William Guy and Campaigns Officer Eden Lati “what NZUSA [New Zealand Union of Students’ Association] are doing to help us?” claiming that other students’ associations are getting traction from NZUSA’s election campaigning. Guy responded by saying that NZUSA will be “providing content for our Facebook page that will not necessarily be on their page”. Heath emphatically stated that “we must be involved in politics ... this is our job,” with Guy replying, “let’s discuss the three key policy priorities right now ... we should already know what affects students”. He then declared that two months ago he was the “only person who supported policy,” to which Heath said: “we decided to be apolitical and just back policy at the start of the year, so I don’t know what you’re talking about. We need to sort this out before we begin visiting colleges.” Baird reassured the Executive that “policies are to be circulated and we will discuss which ones affect students most.”

The meeting ended with a change in the election dates; now the nominations will be open from 21-24 August, with candidate forums between 4-7 September, and the election itself being between 11-14 September.