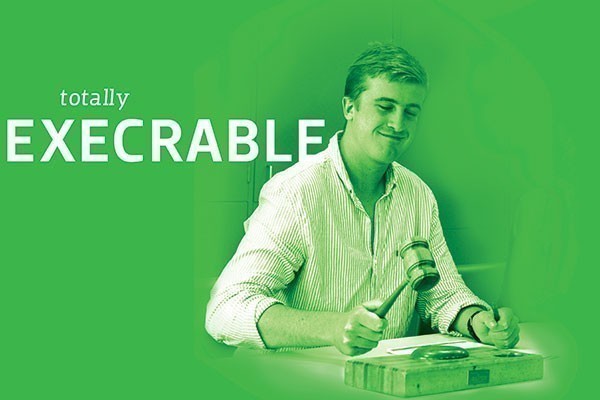 Keeping tabs on the Exec | Issue 18

After the various procedural matters were out of the way, Education Officer Bryn Jenkins formally announced that he will be running for the position of OUSA Executive in the upcoming election. As far as Critic knows, he is the first to publically state his intention to do so.

The nominations for the 2018 Executive Elections will open at 9am on 4 September and then close at 4pm on 7 September, with the voting period running from 9am on 11 September to 4pm on 14 September.

Finance Officer Cody Kirby revealed that the University of Otago app, targeted at students, will be “basic to begin with”. It will initially contain maps of the campus and individualised class timetables, with other features to be added in as time progresses. Kirby noted that the university has “done consulting work and continue[s] interacting with student groups”. He told the group that the prospect of the app is “very exciting”. Colleges Officer James Heath wondered about whether an OUSA tab could be added to the interface, to which Admin VP William Guy said: “I would rather a tab at the Cook instead.”

Discussion then began over OUSA’s preparations for the New Zealand General Election (23 September). Guy explained that several events had been planned, all occurring within the week beginning 21 August, including: Vote 101 (an information session about why it’s important to vote, accompanied by a BBQ), a Forum to which all parties polling above 1 percent have been invited, and an Inform 101 event (an expert panel that will discuss and explore the most important issues facing students in-depth). Additionally, there will be visits to residential colleges to encourage residents to enrol and vote.

In the interests of impartiality, Jenkins wondered whether United Future, who are polling below the aforementioned 1 percent polling threshold but currently have a sitting member of Parliament, will receive an invitation, to which Guy said: “yes, they are the exception to the rule.”

Jenkins continued, wondering whether the New Zealand Union of Students’ Associations (NZUSA) will be involved in the campaign. Guy responded by saying that the “pledge to vote campaign is through their system” as well as “the policy stuff”, with Jenkins responding that “we need to ensure our specific voices are heard on the national level”.

President Hugh Baird proposed a motion to congratulate International Officer Max Chan for his “superb work in organising the Cultural Carnival” and also James Heath for his “great work on the Inter-college Film Festival”.

To conclude the meeting, Baird extended OUSA’s condolences to the families and friends of both OUSA’s 1977 President Ross White and Otago Polytechnic Chaplain Mike Wright.