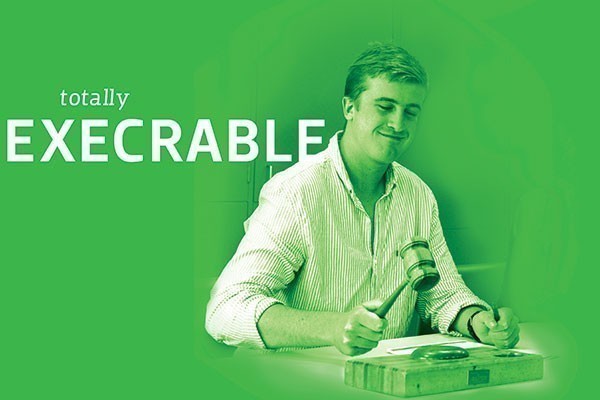 Keeping tabs on the Exec | Issue 17

The OUSA Executive welcomed University of Otago Chief Operating Officer Stephen Willis, Deputy Proctor Andrew Ferguson, Director of Student Services Karyn Thomson, and Student Engagement Manager Rachel Curry, to further discuss the plans to implement CCTV surveillance across North Dunedin, having previously done so in the 8 May meeting. President Hugh Baird moved a motion to have the question and answer session with the executive put into Committee of the Whole (CotW), meaning that everything said in the meeting is unable to be repeated outside of the room, despite not, according to clause 47.2 of the OUSA Constitution, falling ostensibly into either of the categories where entering into CotW is permitted (being either for reasons of confidentiality or commercial sensitivity of the likely content of discussion).

An hour and five minutes later, once the university representatives had left the meeting and a motion was passed to leave CotW, Postgraduate Officer Lucy Northwood moved another motion to “publically thank OUSA Events, R U Okay? volunteers, and all of the other volunteers” who contributed to Re:Orientation for their incredibly hard work. Northwood then personally thanked International Officer Max Chan for his “fantastic work” on the successful International Food Festival, which was held outside the St David Lecture Theatre for the first time.

The meeting then turned to the university’s Business Case for their Support Services Review, in which the proposal of 182 Equivalent Full-Time Staff redundancies was made. President Hugh Baird told the group that he will be having a meeting with the university’s Human Resources Director Kevin Seales. Te Roopu Maori President Eli Toeke exclaiming that he is, “really concerned with what I’ve been told,” before a motion was passed to move the meeting back into CotW for (legitimate) reasons of personal privacy.

Because of the length of the unreportable CCTV discussion, the planned agenda was unable to be fully completed and so will spill over into next week’s meeting.