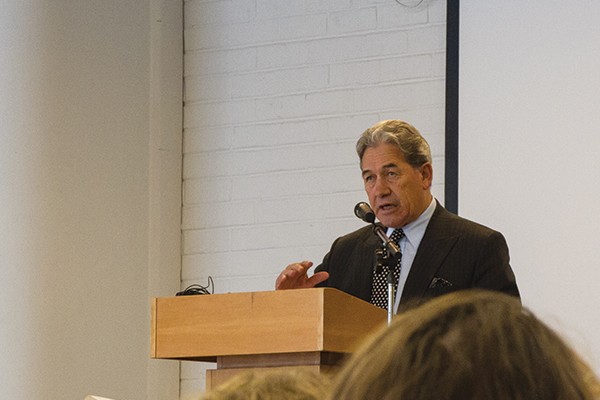 NZ First leader Winston Peters spoke at the University of Otago’s Main Common Room last Wednesday, and within just a few minutes of his speech beginning, began targeting Critic for an article we published in Issue Four.

The article, entitled “Winnie Blues: Winston Peters on Yet Another Anti-Immigration Rant,” drew scorn from Peters, who first asked who is “the unreconstructed, four flushing moron that wrote that article?” before following that up with, “and how did he or she get into this university?”

He spoke about his opposition to drinking beer, how he doesn’t like anti-vaxxers, and the fact that “there’s too much sugar” in tomato sauce, so avoids it.

After finishing his speech, he began answering audience questions, one of which was about superannuation. He initially stated that we need an “affordable way into the future” and then went on to accuse the questioner of “just making up the statistic” that accompanied his question. He then praised the Hong Kong Government for their legislative stance on property development, claiming that they don’t allow you to “just sit on land without developing it,” then immediately going on to praise the “smart Chinese because they have great ideas”.

He also touched on the issue of global warming, decrying the Paris Accord that New Zealand signed up to in April last year, promising to reduce their carbon output as soon as possible and to keep global warming down to below 2 degrees C. He said he would remove New Zealand from that agreement, and that he would instead spend the $1.4 billion annual savings to “deal with our own emissions ourselves”; he didn’t give specifics on what he would spend that money on, however.

Finally, he called the idea of a Universal Basic Income a “looney tune idea,” said he was a populist because “doesn’t everyone want to be popular?”, and that he backs CCTV surveillance so long as it’s “primarily for security and there’s not an ulterior motive”.