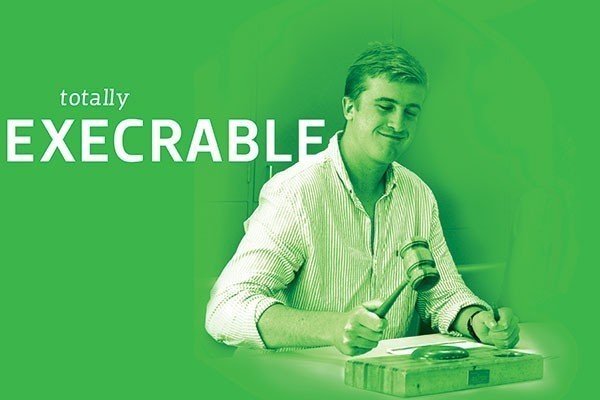 Keeping tabs on the Exec | Issue 11

The University of Otago’s Deputy Proctor Andrew Ferguson and Team Leader for Media Engagement Jo Galer were both present to inform the executive confidentially about the university’s plans. Ferguson began his pitch selling the initiative to the executive, although, approximately two minutes in, OUSA President Hugh Baird said: “this is confidential information isn’t it?” The meeting then immediately entered ‘Committee of the Whole’ (CotW) – meaning that from that point there was a restriction on reporting or speaking about anything said. For more on the university’s plans regarding increased CCTV implementation, see pages six and seven.

There was discussion concerning the referendum, specifically the reasons why the results are non-binding, meaning that the executive are not bound to the result of the vote. Education Officer Bryn Jenkins said that if we want to increase voter turnout and attendance at the upcoming forum, we should make it a binding one, explaining that this would “add more weight to it.” Jenkins went on to say that he had “assumed it was binding,” before Hugh said “we’ll look at that next time,” to which Jenkins explained that he thought the general concept of non-binding referendums are bad and by changing it we will be “leaving a better legacy for future executives.”

OUSA CEO Debbie Downs provided her Operational Report for March, which details how well each branch of the association is working, which includes Critic, Radio One, Clubs and Societies, Marketing and Communications, and many others. In addition to these, there were statistics on participation in OUSA run events, including the number of visitors to Clubs and Socs in February (26,228), number of room bookings (2,159), and the attendance for the Tinie Tempah (770) and Marshmello (880) concerts.

A proposal from Bryn Jenkins and Finance Officer Cody Kirby entitled “empowering students” involved allowing non-OUSA-affiliated groups and individuals to access OUSA’s financial grant system. Kirby said this initiative would “allow students the means to do something they wouldn’t be able to do otherwise.” William Guy responded by saying that we should be “actively encouraging students to make clubs, because if they do they’re more likely to continue these initiatives - not just do one off events.” Debbie Downs said that this needs to be a “very clear policy and not subjective” or it could become problematic.