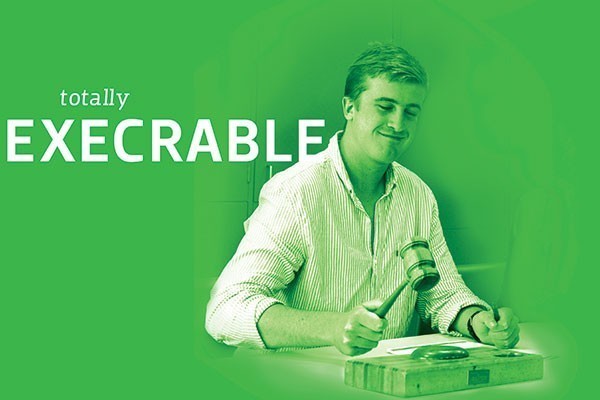 Keeping tabs on the Exec | Issue 10

The Otago Students Against Animal Testing group was affiliated to OUSA without any issue.

President Hugh Baird and Campaigns Officer Eden Lati recently returned from visiting the New Zealand Union of Students’ Associations (NZUSA) in Wellington, where they were determining a strategy for the upcoming national election. Critic wasn’t able to view the document containing the strategy, but the overall response to it was entirely positive. Education Officer Bryn Jenkins said it looks good: “it takes the Victoria University of Wellington Students’ Association’s work and builds on it”. He continued by asking how it will be funded, and specifically whether it will come out of the NZUSA budget. Baird responded by saying “I’m not too sure ... can’t see how it’d cost much, but I’d expect them to pay for that.” Finance Officer Cody Kirby then followed up by asking “what could you tell from the meeting?” with Baird’s response simply being, “not much ... it was pretty basic really.” Jenkins explained the strategy should ideally be moulded to suit our uniquely close-knit campus, before going on to say that we “really need to know exacts for what they’re doing so we can work that into our strategy.”

Welfare Officer Danielle Pope spoke about the success of the OUSA flu jab initiative, which she has championed from start to finish with help from a number of other executive members. The initiative has so far provided over 2,000 flu jabs since 31 March, with approximately 500 appointments still available under the OUSA run scheme, which saves each student $20. To put that into some context, Student Health provides just 1,800 flu jabs throughout the entirety of the year. One of the main aims of the initiative was to show that there is demand from students, and then to put pressure on the university to begin funding it themselves. If this aim is successful, OUSA could save up to $50,000, the current cost of the scheme.

The OUSA Referendum questions, which will begin at 9am on Monday 29 May and close at 4pm on Wednesday 31 May, have been sent to the mediator and will be presented to the executive at their next meeting on Monday 8th May. A forum will be taking place on 22 May at 1pm in the Union Hall, which will include a hot-dog eating competition beforehand and complimentary pizza being offered throughout.