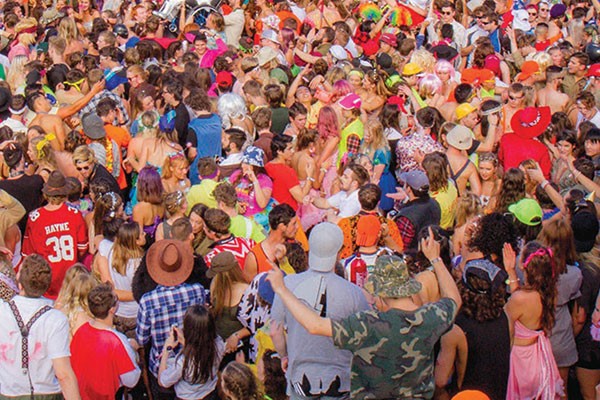 Behind the Scenes at Hyde Street

How OUSA Saved the Day

If you want the raw statistics from Hyde Street, you’ll find them in this article, but you’ll also find much more about what preparations are put in place, and by whom, to make the day tick smoothly and to mitigate the disasters that have occurred in the past. The average attendee was a 3rd year student of 20 years of age; as many as 4,008 students registered in the lottery, of which 1,810 received a ticket. The residents failed to utilise fifty of the tickets they were given (each received eight tickets), which they could use as they wished, whether that be giving them to friends or selling for $170, although the recipient had to be a New Zealand student. The excess tickets ended up in the lottery for general admission.

Some people genuinely hold the view that the involvement of OUSA is killing the event, but it couldn’t be any further from the truth, and that view is becoming quieter and quieter every year that an eventful, yet safe, party occurs. In fact, OUSA has actually saved the event, as it was just five years ago that it was facing an existential crisis following the infamous roof collapse of 2012. The core OUSA events team for the Hyde Street Party is comprised of three people: Jerome Cousins (acting manager on the day), Emma Anderson (responsible for ticketing and volunteer support), and Luke Matsopolous (who was on the ground running the event), but the entire group working on the event totalled approximately 400. Those 400 were made up of five temporary OUSA assistants, forty-five people working on ticketing, fifteen for both setting up and packing down the event, fifteen water warriors, fifty to sixty Are You Okay? volunteers, forty Red Frogs, forty-seven security guards, twenty police officers at the peak period during the day, and twenty-three paramedics. In addition to this extended group, the staff that provided extra support throughout the day included the association CEO Debbie Downs, Secretary Donna Jones, Marketing and Communications Manager Katrina McLennan and Marketing Coordinator Sarah MacDonald. Everyone at OUSA played a part in providing the best party that they possibly could, and have done so for years.

One of the most interesting behind the scenes parts of the day is the presence of the communications truck, tucked away behind the Property Services Building, directly opposite the main entrance to Hyde Street. Within the truck is a member of each of the stakeholders: OUSA’s Cousins, DCC, Police, St John, Are You Okay?, etc. A camera some way above the Property Services building captures the entire day in a live stream, meaning that “if anything happens it gets relayed back to the truck, logged, and then decisions are made ... and it stops services being used in the wrong place, so resources are not wasted, they are just better allocated,” Cousins revealed. The resource allocation aspect of the party has long been contentious, with none other than Mayor Dave Cull claiming last year that he understood the cost to the taxpayer to be upward of $125,000 last year, a statistic that is either a wild fabrication or a figure relevant only to the parties of old. Cousins explained that the reality of the situation is that “OUSA do pay for services like St John’s, Police, security, and food (catering alone costs $12,000 - $15,000).” Although the specific figure is unable to be verified so soon after the party, rough estimates seem to point to the overall OUSA spend being somewhere in the region of $50,000, up from the $25,000 former OUSA President Paul Hunt noted the association spent in 2015. However, if those who didn’t attend / manage to get a ticket were to read that spending increased and be shocked that the association pour such a staggering amount into something they couldn’t experience, they need not panic; the price for the wristbands covers everything provided for on the day.

This year was the first time that the party had a non-student ban on the event (unless you were a non-student resident on Hyde Street, but they are few and far between), something that seemed to be a hugely successful regulative addition to the party. Only ten arrests were made in a party attended by 3,600, with zero charges being lodged as a result, something Matsopolous labelled “a huge success … [and] definitely because of the ban on non-students attending.” In 2016, as few as eight people were arrested and no one was charged as a result. The fact that there were more people arrested this year as opposed to last is not necessarily reflective of the behaviour of the partygoers, as some media organisations are quick to leap on, but likely to be more reflective of the event’s popularity; the arrestees were almost exclusively serial trespassers; also, no one was arrested for assault.

The statistics go a long way to backing up the increasing safety of the party, and thus OUSA’s fantastic effort in its regulation. Some may think ‘safety’ is an antonym for ‘fun’, especially when it’s related to outrageous parties like this one, but that was certainly not reflected in the atmosphere on the day. Out of the 45 people attended to by the St John Ambulance service, only two were deemed put into the ‘moderate’ category (their scales being minor, moderate, serious, critical, and deceased), with the other 43 being categorised as ‘minor’. This is in contrast to the fifty-one St John treatments and eight hospitalisations last year, putting into perspective the vast improvement that has being seen.

The preparation for the April 1st event begins in December, as OUSA meet with the DCC, Police, St John, and others to begin discussion and planning for easily the most sought after single day party in the entire student calendar. Beyond the generous praise from a plethora of stakeholders, residents, volunteers, and other workers, it’s largely “a thankless task, but it doesn’t need to be ... when we’re in the comms van and are seeing the statistics of injuries not going up that shows us that what we’ve done has worked.”