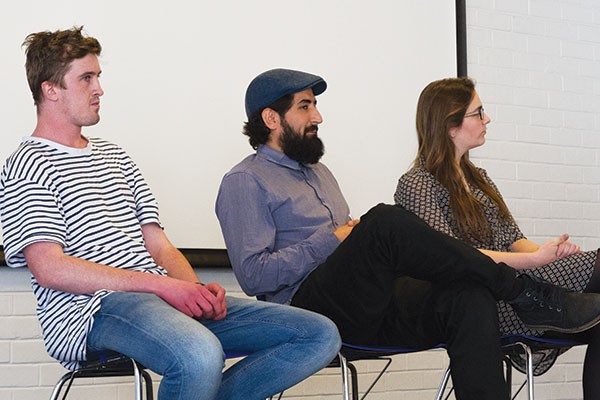 The OUSA Election Forums that ran last week, were a chance for students to hear what the candidates running for the 2017 OUSA Executive are pledging to do if they are elected.

Hugh Baird is the editor of Critic*, and is running on the ‘Hugh Baird for President’ ticket alongside Administrative Vice-Presidential nominee, William Guy. He launched into claims of student rights being abrogated by the university and will “strongly oppose” any initiatives from the university that continues this trend. Additionally, he would do everything in his power to ensure the future of the Hyde Street Party, agrees with the building of the Animal Research Centre, and points to his work at Critic as showing an insight into the running of OUSA, something he says gives him a significant benefit over the other candidates. His response to a question asking of any examples of past participation in any form of activism was met with a red-faced “No.”

Lark Hare is running on the ‘Your Voice Ticket’ alongside four other nominees for various executive positions. She is a member of Amnesty International, FriendLink, and the President of Roteract Dunedin among other affiliated charities and groups. She spent extensive time defending a controversial $70,000 food truck initiative ‘Your Voice’ would implement, although was the most energetic of the three candidates throughout. Lark has promised to visit each hall of residence and every OUSA affiliated club in her first month in the job to increase OUSA’s reach to students. Lark also wants to see the Hyde Street Party continue, specifically pointing to OUSA’s involvement as a key factor in its recent success.

Hashmat Lafraie is the Vice President of the Muslim Students Association, but is not affiliated with any other candidate in this electoral process. He has outlined zero fees for domestic and international students as one of his main policies, as well as helping prevent and treat mental illness among students; however, he noted he had “no suggestions” on how to meaningfully make an impact here. “OUSA is a shell” he stated, with it being more about provision of services, but no longer involved in lobbying for what students actually want nowadays. If Hashmat won, he said he would enter Harlene Hayne’s office on day one of the job to tell her that she earns too much. His views on punishment for student wrongdoing is to do so therapeutically as opposed to punishing them.

*Hugh has not been working at Critic or been involved in anyway with any of the OUSA Executive Election articles at all this week.