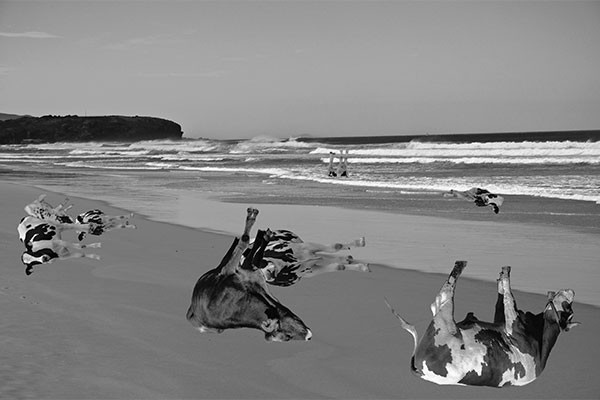 A bit of beef at the beach

Multiple cows have washed up on Dunedin beaches in recent weeks, with local residents confused as to how they got there.

As many as three cows were washed up on St Clair beach, with two others appearing in the Lawyer’s Head and Tomohawk areas.

Brian Benn, Senior Sergeant of Dunedin, said that locals had informed police that as many as three dead cattle were washed up on St Clair beach on the 3rd of September. Although, police could only officially confirm that one carcass had been found, but removed by a contractor for the council prior to the police arriving.

Scott MacLean, director of environmental monitoring and operations at the Otago Regional Council, told the New Zealand Herald that the owner of one of the beasts had been in contact with the council. His farm was located on a clifftop above St Clair beach. MacLean said the farmer was able to identify the animal as his “based on an ear tag from the carcass.”

It has also been suggested that some of the animals may have been washed out to the beach due to flooding.

Contractors for the Otago Regional Council have removed the carcasses. In one case, the animal was buried on site at St Kilda beach because it was unable to be removed due to the state it was in, according to a Dunedin City Council spokesperson.

Critic spoke to Hans Kriek, the executive director for SAFE, about the welfare of these animals. He said that it was “hard to judge because we don’t know how they ended up there.” He said it was “most logical that they fell off cliffs or got swept away” and there was “not necessarily foul play.” “We don’t have any particular reason to believe there is anything more sinister here.”

He did believe that the appearance of the cows “definitely needs to be investigated,” especially if they are found to be all coming from one farm. However, “it could just be a coincidence as the odd animal will wash up,” Kriek said.

Kriek urged that if anyone feels there are reasons for concern, they should report it to Ministry of Primary Industries.