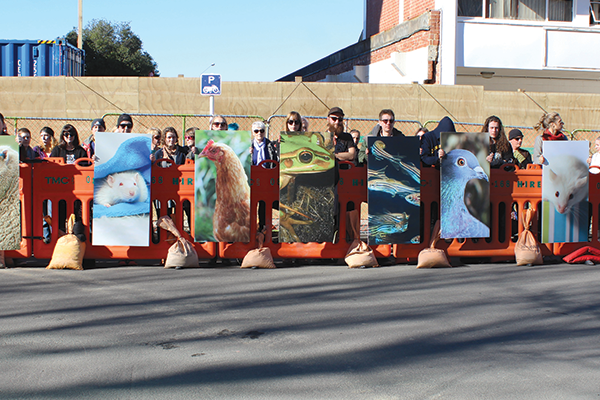 Around 75 people attended a protest on Saturday July 13 against the $50 million animal research centre being built on the University of Otago campus. The protest took place at the facility building site on Great King street. It was reportedly peaceful, with no police attendance required and campus watch simply looking on. Protesters held signs of healthy animals for the duration of the protest, before turning them around at the end to reveal hurt and tested upon animals.

Critic spoke to Tara Jackson, a member of the New Zealand Anti-Vivisection Society (NZAVS) and an organiser of the protest. She said that they wanted to prevent this kind of testing because “animal-based research is not the most accurate or reliable method of research, especially in the medical field.”

Jackson said that while The University of Otago still uses animals to train medical students, “all medical training done in the U.S and Canada is done using non-animal methods,” indicating that these methods are unnecessary. “In 2016 it seems so backwards to invest millions of dollars in such outdated practices.”

According to Jackson, “last year alone the University used over 13,000 animals and over 11,000 of these were killed during or after experiments.” These protests are about putting an end to the perceived needless loss of life.

In comparison, the U.S and Canada use non-animal methods for medical training. Jackson argues that this indicates just how “behind the University is and proves that they don't use alternatives whenever they exist.”

This is not going to be their only action against the facility; “this is just our first action of many. Just because the building goes up, it doesn't mean that there has to be animals inside. The University could quite easily turn the building into a non-animal based research facility.”

Ultimately, NZAVS want “the university to adopt the best methods that modern science has to offer.” Methods which will not rely on the “poor predictive value of animal research.”

The University has stated that animal testing will only occur when no other method is available, and that animals will not be subjected to suffering as they are anaesthetised.  University of Otago Deputy Vice-Chancellor for Research and Enterprise Professor Richard Blaikie has previously said that the centre is to replace run down existing facilities and to ensure they are able to provide the “highest standard of care” for animals used.

Florence Dean, an attendee of the protest, said that the atmosphere was “peaceful” and there was a sense of “solidarity” amongst attendees. She believes that students mostly see animal testing as a last resort, and may not understand how unnecessary the loss of life is at these research centres. “Hopefully this campaign with help change that.”