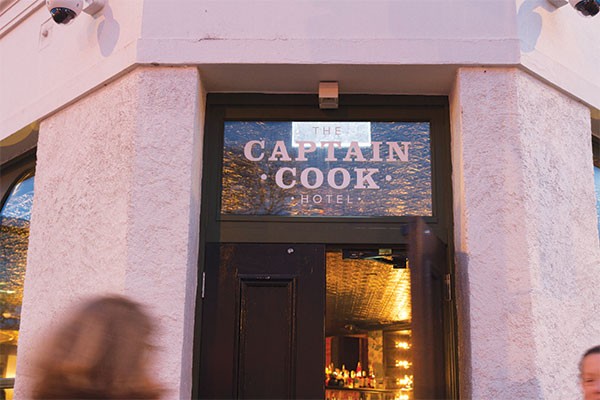 The Captain Cook Tavern is back, but not as students will remember

Even Dunedin’s sweet summer children who have not yet survived a winter will still have heard praise of the revered pub, which was forced to close in 2014 due to legal matters. However, other factors such as students favouring a cheap trip to the liquor store for a Scrumpy or a box of Cindy’s (god bless) and a crackdown on Otago’s scarfie culture certainly contributed to the 154-year-old pub closing its doors.

The future for the Cook looked bleak in 2014. There was no reason to suspect it wouldn’t become a vacant and austere memorial of good times passed, like Monkey Bar, or a simple study centre, like Gardies, or, whatever the fuck Boogie is now. Rumours about the Cook’s future spread like cold sores through Uni Col.

That’s why it came as such a surprise when a massive redevelopment project began at the historic venue, courtesy of its new owners.  Operations manager Sheldon Lye said they had “really tried to modernise the whole hotel, [while] retaining a genuine feel to it,” adding that “this is New Zealand’s most famous pub.” It’s a bold claim, but it’s believable.

The building has been restored in the style of English pub, complete with a corner entry, fireplaces and a traditional horseshoe-shaped bar. Captain Cook Hotel, as it is now known, considers itself more of a gastropub than a student pub, a decision presumably made to cater to a larger clientele and to prevent the issues that led to its closure in 2014.

In more ways than just title, Captain Cook Tavern and Captain Cook Hotel appear to be entirely different entities. Understandably, the reopened bar has chosen to distance itself from… well, itself. Students looking to sip on $5 jugs while slipping gold coins into pokies amidst the potent smell of urine will have to continue their search elsewhere. Think of it more as a place to catch up with some mates over a beer and a meal as opposed to an after-hours babysitter for your drunken antics. Getting smashed to the point where you drunk-text your Year eight ex might be out of the question now, unless you have deep pockets (you’re looking at $16 a jug) or a shallow tolerance for alcohol.

Students haven’t been dismissed completely in favour of classing the place up. An upstairs student-orientated nightclub catering to late night and weekend crowds is expected to open in mid-June, which could serve as a suitable pit-stop on the midnight crawl from Starters to the Octagon in lieu of the now desolate bar formerly known as Boogie.

There’s not really much to complain about with the brand new Captain Cook Hotel; the inviting, warm atmosphere makes it a suitable choice for a few quiet ones, while the promise of a student area upstairs is an exciting prospect. You have to remember that at the end of the day, The Cook is a business, and it wouldn’t be feasible for it to reopen with a style the same as what it operated (and closed) under in 2014. So get in there like swimwear and support New Zealand’s most famous pub.