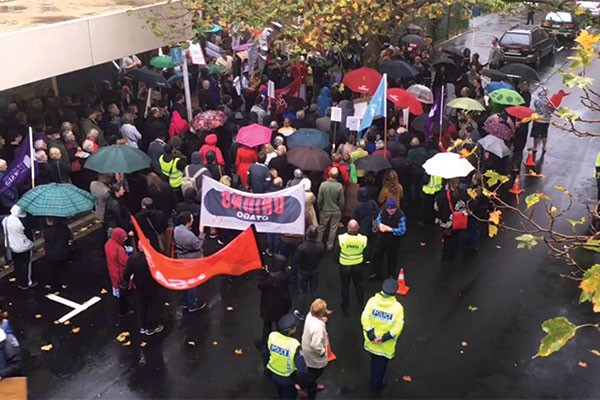 Around 300 people gathered outside Dunedin Hospital on April 29 to highlight their dissatisfaction with the standard of Compass Group’s food for patients.

The protest was organised by the Real Meals Coalition, who have vociferously called on the Southern District Health Board to prematurely cancel the contract with the Compass Group.

Compass Group was hired to provide meals for the Dunedin Hospital starting early February this year. The District Health Board (DHB) entered into a 15 year contract with the company, and since there has been a lot of vocal protest about the changes.

South Dunedin MP Clare Curran told Stuff.co.nz that entering into such a contract was a ”stupid thing to do.”

Compass were hired to provide meals for patients at Southern and Otago hospitals as a cost cutting method for the struggling SDHB.

Patients posted images of their meals on social media, and many complaints have since been made about the quality of the food being offered to patients. Some of the protester’s signs read “food for health, not for wealth.”

Tim Shadbolt, the mayor of Invercargill, attended the protest, saying he was pleased to be fighting alongside his “brothers and sisters from Otago on a health issue”. Last time he was here it was to fight the cuts to neurological services. “We won that one, and we can win this one as well,” he said.

In an opinion piece published in the ODT on April 27 the SDHB Chief Executive Officer, Carole Heatly, stated that the complaints are not reflective of the situation, and that the anxiety levels of “patients and families, already facing the health worries that have brought them to us […] are being raised unnecessarily” about the food at the hospital.

Heatly argues that protestors are using this issue in order to “argue a different agenda, about outsourcing.” The SDHB are confident that Compass are providing food of an acceptable standard to patients, which meet nutritional standards, and that Compass is working towards improving the situation based on patients complaints.

The protest was coordinated by several different organisations, referred to as the Real Meal Coalition, which includes Grey Power Southland, Unions Otago, Unions Southland, Labour, the Green Party, New Zealand First, among others.