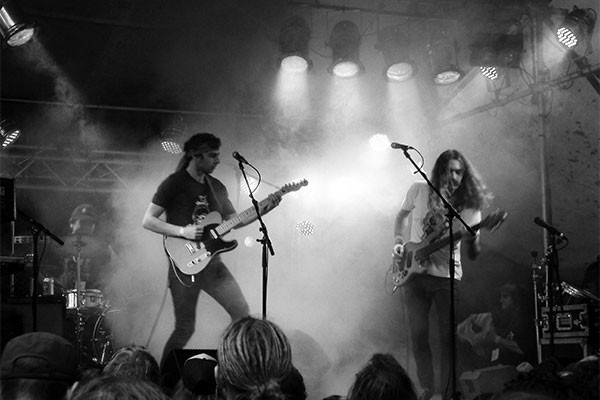 Around 400 people attended the sold-out event, which featured 18 acts from Dunedin, Auckland, Christchurch, Wellington and Sydney, including Dunedin Sound legends The Chills. The first half of the concert was held in the backyard of 3 Fea Street, and the second half at Re:Fuel.

The leadup to the festival was overshadowed by a social media spat over a lack of gender diversity in the lineup. More than fifty musicians performed on the day but only five were women, leading some Facebookers to brand the event “chadsville” and “a sausagefest”.

In a post on the Dunedin Music Facebook group, Saz Mondo called for concertgoers to boycott the event for having overlooked “numerous potential female acts”.

Marshall said the organisers did not mean to cause offence with the festival’s lineup. “The ethos of this festival was always just a party for our friends in the backyard,” he said.

However, he said that the controversy had changed his perspective on curating lineups, and that gender balance would be “forever in [his] mind” after this year.

Molly Devine, who performed with Kafka Collective for part of their set and wore a t-shirt emblazoned with the words “Pussy Power”, said the festival was “a really great day” but the lack of women musicians was noticeable.

In a Facebook post after the event, Devine wrote that she has experienced sexism throughout her career as a musician, and that women musicians were often made to feel unwelcome at festivals. However, she told Critic she didn’t blame the Feastock organisers – “they didn’t start the patriarchy” – and the important thing was that they were willing to listen.

Devine met with the festival organisers to discuss the lack of women and said their response was “pretty amazing and open”. Devine said she would be “surprised” if the issue were not addressed next year.

Tom Corrigan, keyboardist for opening act Iron Mammoth, told Critic that gender balance at festivals was important, but said this should be weighed against the size and profile of the event. He thought it was unfair to single out Feastock for criticism.

The festival has run every year since 2009 and has a dedicated following. Daisy Blincoe, who travelled from Auckland to attend, said she flies down every year to see “a heap of excellent Dunedin bands”.

Highlights this year included Wellington band Funkacybin’s cover of Prince’s “Purple Rain”, and a set by locals Made In China, their first live performance in three years.

“It was great, it was highly nostalgic,” Made In China singer Sam McKean told Critic. McKean hinted at further Made In China gigs in the future.