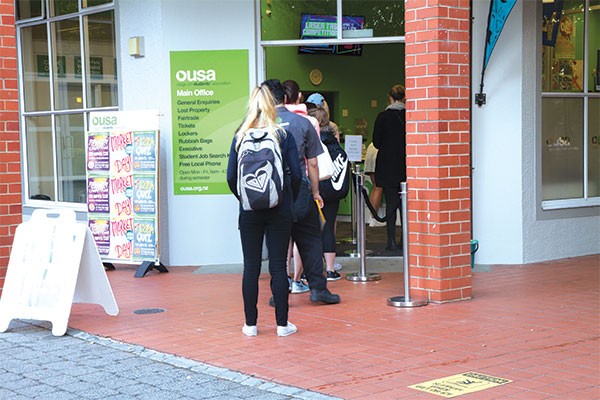 OUSA Fucks Off Students Once More

Last Tuesday students expressed their frustration following the crash of the OUSA server during the Hyde Street party ticket sales which were due to start at 9 am. OUSA have reported that they received over 7000 page reload requests per second during the initial ticket offering at 9am which shut down the server.

During last week’s OUSA Executive meeting, Administrative Vice President Jarred Griffiths expressed concern over the incident asking to know “how the error happened, what was done to fix it later in the day”.

According to OUSA the server failed to manage the number of requests to the website which resulted in a shutdown of the service. The failure was attributed to a change in configuration of the server set for this year’s ticketing services. The new design of the website was planned to allow anyone who had got through the online form 10 minutes before the ticket expired. During the 10 minute window people would be able to read the terms and conditions and enter in their details without fear of losing their ticket. The system was a new design for 2016 which altered from previous years where those vying for entry to the party would have to enter in their details as fast as possible in order to receive a ticket.

OUSA reported that during both the 9am and rescheduled 12.30 sale the new system design failed to process the immense volume of those seeking tickets. The server saw up to 7000 page reloads per second during the 9am sale and over 11,000 during the 12.30 reschedule.

The 9am sale allowed 16 to 19 students to purchase tickets within the first few seconds after coming online, however many who were in the process of filling out forms were unable to complete them after the server shutdown.

A back-up plan was put in place by OUSA to switch to a Google Form, which was ultimately used when the system was unable to cope a second time at 12.30. According to OUSA the 1000 tickets offered sold out within 45 seconds after the service went online just after 12.30pm. 28 lucky students were able to register tickets past the 1000 that were intended to be offered as the server was unable to shut down fast enough once the limit was reached.

During both sales students were left wondering what was happening, many of which took to Facebook to express their frustration. One student commented on the Hyde Street Party Facebook page saying “this release is more poorly managed than Kanye’s release of Pablo.”

CEO of OUSA Debbie Downs said that while it was unfortunate the ticketing service didn’t work as planned ultimately no one was adversely affected.

“Nobody was adversely affected is the first thing, people are just pissed they didn’t get a ticket. At 9am this morning we were experiencing over 7000 page loads per second. [OUSA] had tested [the server] to make sure we could do it. So all the testing had been done, but as everyone knows with this sort of thing, you don’t know until you know.”

Ms Downs went on to say that a new plan would be considered for 2017.

“[It took] 45 seconds for the 1000 tickets to sell once it was operational. We don’t have the infrastructure to deal with those sorts of numbers, we’re not Ticket Master. We will rethink again for next year” said Ms Downs.