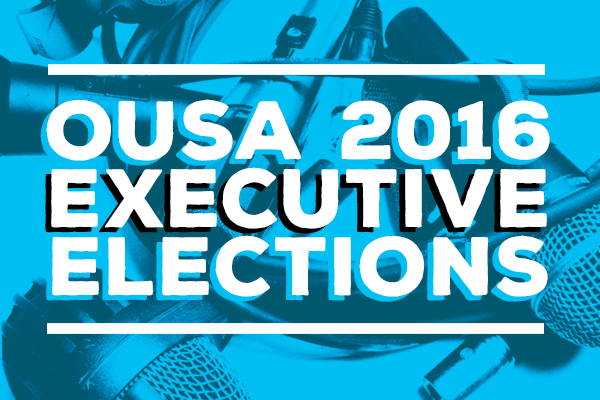 The MC, and current OUSA acting president Isaac Yu, told Payal she had been accused of not being a team player in her current role as Welfare Officer. She argued this was untrue and said even if she personally disagreed with an initiative, she would support it and make it happen.

One of Payal’s main platforms is her rental home improvements, and she said she has drafted a letter template for tenants to send their landlords.

When asked what she would name a bar, she passed. Overall, Nina spoke confidently. Her main policy areas are a housing warrant of fitness, more government funding for students, and to buy a student bar.

When asked why she did so little in her role as Finance Officer to reduce OUSA’s financial dependence on the university, she argued that her role on the exec was “not a public one” and that she had been working on ways to reduce dependence.

The audience tended to criticise Nina’s promise to buy a student bar, claiming that students already have a bar (ReFuel) and buying another wouldn’t be financially viable. Nina claimed that ReFuel is only a failure because of its location, so she would buy a bar in or near the Octagon, which Critic notes has some of the highest rent in Dunedin’s CBD. Nina said if the bar did fail, she would sell “Throwback“ for a profit.

Nina said her biggest weakness on the executive was not being able to separate her personal and professional capabilities, and her strength was her accessibility. Laura went through her policy spiel: scrapping the seven-EFTS limit, and improving flats and student services.

Laura said the biggest issue facing students is a lack of student representation nationally and she wants a new national model of student presidents to be created. She voted to leave NZUSA in 2014.

When asked why she didn’t deliver on her 2014 election promises as Education Officer, Laura said she had completed two out of three but, due to time constraints, struggled to keep her promise on student allowances.

An audience member why she should be president when her policy ideas could all be delegated to other branches, e.g. free flu shots was to do with Student Health. She believes the president “has to delegate”, which she would do.

Laura said her weakness on the exec was “doing more than my job” and that her strength was that she has “no political aspirations”.

Although against the idea, Laura would call the student bar “The Craftie Scarfie”. Paul spoke of his desire to empower students, specifically through clubs and societies. He also mentioned that the mental health of students was decreasing due to financial stress.

Paul was accused by the the MC of being an apolitical president, which he denied. He said his philosophy is that he prefers to take issues to the table and work through them.

When asked to talk about a key part of his campaign, Paul said he wanted to invest in student entrepreneurs and offer them a financial kickstart. Paul then lapsed into financial jargon while the eyes of audience members glazed over.

Paul said his biggest executive weakness was not being “out there” and in touch with students, for example, “I don’t have Yik Yak.” He said his biggest strength is that he has already been president.

Paul’s student bar would be named “The Scarfie”.  How original. Lync, the only Admin VP candidate running individually, is a first-year health sci. Lync says he has experience working in a position of “authority”. He wants to advocate for podcasting in all courses, as if we haven’t heard that one before. Jarred wants OUSA to “stand up on issues”. When asked by candidate Nina Harrap if his work for David Clark will hinder his ability to lobby a large number of MPs, Jarred said this is a strength because he has more contact with MPs than any other candidate. Toa wants to improve the quality of OUSA’s free breakfasts — he said it would “only cost $50 to feed bacon and eggs to 200 students”. Toa is currently the International Officer, which he says has given him leadership qualities and motivation. Ciaren has no formal financial education, but has “taken an economics paper in first year”. He said he will seek advice from OUSA staff and fellow executives, and was quick to call out the idea of buying a bar, calling it a “ridiculous idea”. Jesse says he wants to “cut costs and increase revenues”. He said he would have invested in the Cook if it were for sale, and says he would invest in the hospitality sector as Finance Officer, despite so many local bars recently closing due to financial difficulty. Diego said he will make podcasts available for all lectures. When asked how he would do this, considering many departments are against podcasting due to student grades falling, Diego paused before saying “I don’t know”. We’ll leave it there. Alexia believes we are here to be educated. No shit. Like the last 10 speakers, she and her ticket think “student associations should be unified”. When asked which house she would be placed in had she attended Hogwarts, she said Emma Watson. Matthew said OUSA’s withdrawal from NZUSA gives students “less of a voice”. Matthew says a new model should be put in place, like every other candidate. Matthew wants to reorganise the class rep system. Bryn was no stranger to the pity card, saying he had to work for two years to save for university. Bryn denied he is out of touch with students since he lives in Knox College (don’t they all). Bryn wants curtains in flats.