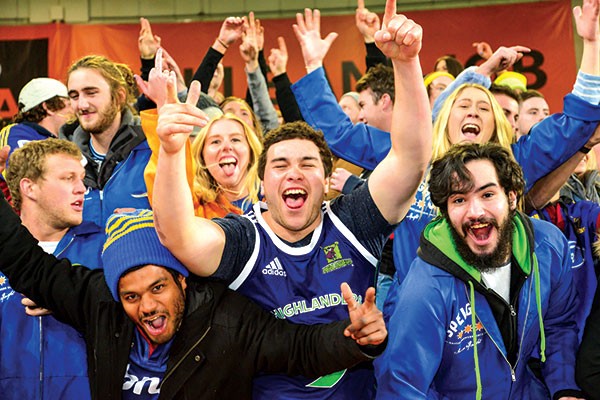 Now that the Super Rugby season is finished and the trophy is safely locked away down at Forsyth Barr Stadium, we can dish out final grades for our five New Zealand teams after an epic season of rugby. The Highlanders and the Hurricanes were a cut above the rest while the Chiefs ran out of steam, the Crusaders were never really in it and the Blues were hugely disappointing. We should all be Highlanders fans at Otago, but how did our other teams perform?

An absolute fairytale of a season for the southern men whom nobody believed in. Also the main reason why many of us missed our first day of classes as we celebrated with the Super Rugby trophy in the Octagon.

The Highlanders showed their promise from very early in the season and, even as their momentum slowly built, they somehow managed to keep their underdog status right up until the last minute of the final. Those who say the Hurricanes choked are not giving credit to the quality of rugby that the Highlanders brought to the competition this year. They were simply a joy to watch as they became one of only a handful of teams to win the title away from home. Jamie Joseph engineered a massive turnaround for the club after finishing 2013 with only three wins, and this was a season of attractive and attacking rugby that even the Aussie commentators had to eventually give them credit for. This has seen deserved All Blacks call-ups for Waisake Naholo and Lima Sopoaga, while Elliot Dixon, (man-of-the-match from the final) has earned a Maori All Blacks call-up alongside fellow Highlanders forwards, Shane Christie and Josh Hohneck, to face Fiji. With most of the title-winning squad contracted for next season, only a few spots are up for grabs if Jamie Joseph feels they can help improve a history-making squad that will be keen to emulate the Chiefs by backing up their first Super Rugby title with a second next year. Up the Landers!

TOP STATS: Sopoaga — most points (191), Naholo — most tries (13).
Highlight: Aaron Smith controlling the last minute of the final to ensure the win.
WORST MOMENT: Starting the season with a loss to the Crusaders during O-Week.
MVP: Waisake Naholo. The flying winger broke the Highlanders’ try-scoring record and scored in all three of their playoff games to help seal the title.
FINAL GRADE: A+ Tuned out the haters, played great and put on a masterclass of knockout rugby.

After a great regular season that surprised everyone, the stage was set for the Hurricanes to make a bit of history with the combination of several players playing their last game for the club, the shock death of club legend Jerry Collins, and a home final after a dominant season in which they beat the Highlanders twice providing a convincing narrative that pointed towards a Hurricanes win. They just forgot to turn up on the night. However, losing in the final should not take the shine off an otherwise successful year; they proved they deserved to be the table-topping team after a season of convincing performances and attractive rugby. The Savea brothers continued to bully teams with their size and power, while the quick skills of TJ Perenara showed why he is such a threat to Aaron Smith’s hold on the All Blacks halfback jersey. The future should be bright for the Canes, but with midfield stalwarts Conrad Smith and Ma’a Nonu leaving for Europe, the Hurricanes might go backwards rather than forwards as they start next year as the only New Zealand team to have never won a Super Rugby title. Depending on the true depth of their wider squad, it will be hard to match the achievements of this season — we all know that hurricanes eventually run out of power.

TOP STATS:  Most tries scored (63) and most four-try bonus points (9).
Highlight: Their unbeaten road trip over the first six rounds.
WORST MOMENT:  Julian Savea fumbling a certain try in the final.
MVP:  Nehe Milner-Skudder. Looked absolutely electric every time he got the ball and will be an asset for the All Blacks at the World Cup. Epitomised the Hurricanes’ exciting style this year.
FINAL GRADE: A Still a fantastic season, but coming so close will haunt them for years.

The Chiefs have been the best New Zealand team over the last few years but, despite looking dangerous at the beginning of this season, their shortcomings were exposed in their three losses to the eventual champion Highlanders. A final-round loss to the Hurricanes seemed to knock their confidence heading into the playoffs, and injuries played a part in their downfall as Aaron Cruden and some key forwards were banged up on the side-lines. Even Sonny Bill Williams looks to have lost some of his aura of dominance with his predictable hit-up and offload tactics being easily neutralised. The Chiefs gave up the most penalties and yellow-cards this season, so discipline will be something to improve upon for next year. It will be a testing off-season for the Chiefs, who could come back stronger next year or fade back into the mid-table obscurity they used to be so well known for. All Blacks call-ups for impressive centre Charlie Ngatai and halfback Brad Weber are positive signs for player development, and winger James Lowe is quickly turning into a potent asset with his speed and left-foot kicking options.

TOP STATS:  Most offloads (298).
Highlight: Keeping the Crusaders try-less in Christchurch.
WORST MOMENT:  Losing to a last-minute Highlanders’ penalty in Hamilton.
MVP: Damian McKenzie. The young fly half and fullback really stepped up in the absence of Aaron Cruden and will be one to watch for the next generation of All Blacks.
FINAL GRADE: B Outclassed by both the Highlanders and the Hurricanes, so just missed out on honours.

Despite scoring plenty of points in some big wins, only a seventh place finish was possible for the team that went so close to winning the title last year. A pretty poor return for the competition’s most successful team, which is full of All Blacks talent. A dip in form during the middle of the season with back-to-back home losses was the turning point as they slipped further and further from finals contention despite some very convoluted mathematics giving them false hope if results elsewhere were favourable. They weren’t. It did seem as though the large All Blacks contingent in the Crusaders took this season a little bit easy, maybe having one eye on the World Cup. If this careful player management can help the All Blacks retain the World Cup, then the Crusaders deserve a big thank you for taking one for the team, but Crusaders faithful fans will be keen for a return to the top of the table next season.

TOP STATS:  Most points (481)
Highlight: Their seven-try comeback in the second half against the Cheetahs in Round 6.
WORST MOMENT:  Losing to the Highlanders at home in Round 9.
MVP: Dan Carter. A welcome return to form for the All Blacks fly half who managed better kicking accuracy than his rivals for the All Blacks number ten shirt.
FINAL GRADE: C+ A very “Cs get degrees” feel to the Crusaders season.

With only three wins all season, the Blues were lucky not to pick up the wooden spoon this year, finishing just above the Force after a run of early-season losses effectively ended their season in April. Coach John Kirwan inevitably paid the ultimate price for his disappointing few seasons in charge and has made way for All Blacks and Hurricanes legend, Tana Umaga, who will need to oversee a massive change in fortunes at the club that failed to beat any of the other New Zealand teams all year. Some outstanding individual moments need to be rounded into a better team performance, and there is no shortage of talent up north to be able to pull this off. It wasn’t long ago that many Blues fans were calling for the Highlanders franchise to shift north. It’s funny how things change so quickly.

TOP STATS:  Scored the most losing bonus points (6) and had the best tackle success (88%).
Highlight: Scoring their first win against the Brumbies in Round 9.
WORST MOMENT: Being dismantled 44–7 by the Highlanders in their final game at Eden Park.
MVP: Akira Ioane. The giant loose forward looks to be an absolute beast, and it’s only a matter of time before he gets a shot with the All Blacks after impressing at the Under 20 World Champs.
FINAL GRADE: F Positives were few and far between. Can’t pass with this kind of record.