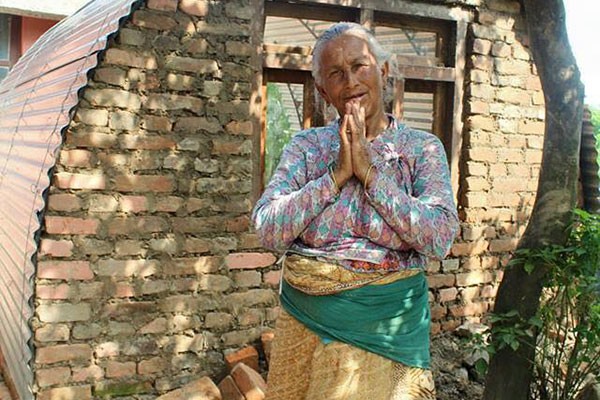 Aformer University of Otago student has set up camp in Nepal in order to rehome families after over 700,000 houses were destroyed in the recent earthquakes. Matthew McAtamney, who graduated from Otago in 2012 with a Bachelor of Commerce in Marketing and Tourism, has been travelling back and forth from his home in Australia to work in and around Kathmandu City.

“The work I’ve been doing, in short, is building temporary shelters for earthquake victims both in rural villages and around Kathmandu City itself or close to it. The shelters are temporary homes for people who have been left with nothing after the quakes,” said McAtamney.

McAtamney works with fellow volunteers to build hollow shelters for families, which the families then fill and insulate themselves. The volunteers also teach the locals how to use the materials to build the shelters on their own.

“Being from New Zealand, we all have a gift of being fast learners and good teachers, but also have a lot of DIY initiative or Kiwi ingenuity, which we all have even if we don’t think we do,” said McAtamney. “This is compared with a population vastly under-educated with simple technologies like fencing wire, roof tin (corrugated iron).”

“Being international is a great drawcard for the local volunteers, which I had never expected. For example, a lot of [local] volunteers will come just so they can meet you and build with you and learn from you,” he said.

Rise Nepal also relies entirely on donations to purchase the materials needed for the shelters. The material for one shelter costs US$120 and volunteers build the shelters for free, so all money donated “goes 100 percent into the shelter”. These shelters can house families for up to a year or more.

McAtamney also wanted to counter the “misled, uninformed information” that has been circulating about Nepal since the quakes. “Many countries have been telling people not to visit Nepal because it’s unsafe … it really frustrates me.”

“The problem is, the country relies so heavily on tourists but there are no tourists there at the moment, the little businesses are making no money, the hotels are empty, the trekking routes are empty,” said McAtamney. “Nepal is so safe and so beautiful to travel, now as much as ever. I didn’t feel a quake the whole time I was there, I felt safer there than I would walking around North or South Dunedin.”

McAtamney says the work is “extremely rewarding, both for me personally in a personal growth and travel experience way, but there’s also a major feel-good factor as you are building someone with nothing left a new home.”

“The people are incredible, even after what they’ve been through, all of the hard times, they’re still so happy. Everyone wants to help each other, but it’s heartbreaking seeing the destruction. Every 10 houses there’s one that’s completely flattened.”

Donations to Rise Nepal can be made here: http://bit.ly/1T80KO3

To volunteer for Rise Nepal, please contact Matt at matt.mcatamney@gmail.com