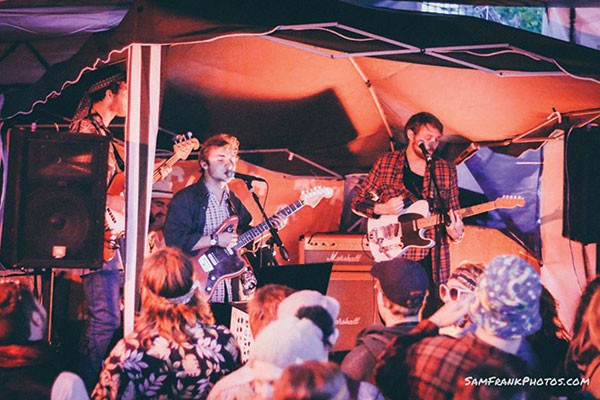 Party for Nepal Shakes off the Fines

A house party held to raise funds for the crisis in Nepal had its fine for “unreasonable noise” revoked by the Dunedin City Council (DCC).

The party, held at the “Melocasa” flat on the corner of Union and Queen streets on 14 May, was organised to raise funds for Nepal after two major earthquakes hit the nation. Security and food were provided at the event, which was organised by students Sam Fraser and Zac Fraser. The pair flew bands, such as LAKES from Auckland, to play at the party.

Roslyn McGill, team leader for Environmental Health at the DCC, said the fine was imposed after “approximately eight noise complaints” were made in relation to the party.

George Steele-Mortimer, a resident at Melocasa, said they “stopped all live music at ten”. However, “our mistake was leaving the equipment out on the stage, resulting in a couple of intoxicated individuals reinitiating the music”. Steele-Mortimer said he believes this was the “only mistake” made all night. McGill said although the organisers agreed to stop the party early, “it got out of control after ten and that resulted in a seizure of equipment”.

The resulting fine for not complying with the noise regulations was $500, approximately the same as the funds raised. “When we heard that all our hard effort to raise some money for those who desperately needed it was going to be used to fuel the shutting down of more Dunedin parties, we were pretty barred up to say the least,” said Steele-Mortimer.

The flat asked the council if they could instead donate the money to the Red Cross relief efforts, which the DCC agreed to. Steele-Mortimer said it’s “fantastic to see humans with emotions behind the nine-to-five face”.

“We are always taught to resort back to a ‘rule book’,” said Steele-Mortimer. “However, the best outcome in this instance was to divert away from what the law states and do direct good to the people who needed it.”

McGill agreed, saying the DCC had “run the gauntlet of a registry role versus trying to supply a good customer contact, and that was an excellent initiative by the flat to come up with that”.

“[We] are aware that they attempted to have a party that was under control and we acknowledge their attempts and so we were happy to meet with them half way,” she said.

The money has now been donated to the Red Cross to assist with its work in Nepal.