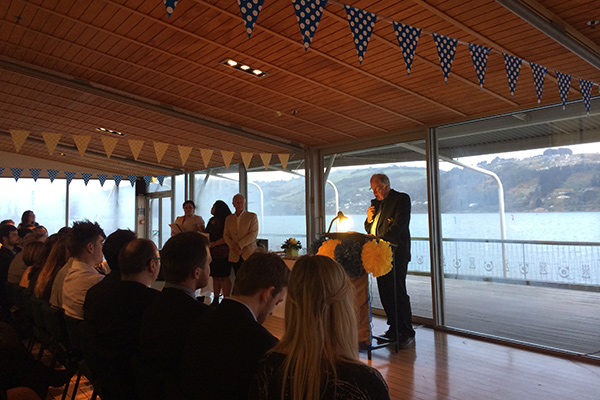 Squash gets quashed on pinot at OUSA's expense

The University of Otago celebrated the success of sporting, cultural and service achievements at the annual Blues and Golds awards ceremony on Thursday 25 September at the University Rowing Club.

OUSA Recreation Officer Henri Faulkner welcomed everyone to the event before introducing MBA lecturer and former Oxford University rugby representative Richard Higham as the MC for the evening. Higham really brought entertainment to what could have been a tedious hand-clapping session.

Sportsman of the Year was awarded to Andrew Potter for his high achievements in rowing. These included his re-selection in the New Zealand under 21 team for 2014, his gold medal in the 5km and 2km under 21 Trans-Tasman rowing series and he won the best of three races in the St Petersburg State university test series.

Jordan Housiaux received University of Otago Sportswoman of the Year, Maori Sportsperson of the year and an Otago Blue Award for her incredible achievements as a member of the New Zealand Paddle Ferns. Unfortunately, she was unable to attend as she was competing in the World Canoe Polo Championships in France.

OUSA’s choice in Richard Higham as announcer was well received by the audience. When Tori Peeters received her University of Otago Blues for achievement in Athletics, Higham stated, “she is a person to watch – and I endorse that. She is a good looking person.” He also did a fabulous job at visualising the imaginary envelopes to announce award winners with, which OUSA failed to provide.

Higham called on dancer Anna McBride who achieved her University of Otago Gold award, to show that she could actually dance and asked her to give a short tap performance, which she did abidingly – proving her ability and confidence on the dance floor.

Kylie Price received a Gold Award for her success in music, having recently been announced as a finalist in the NZ National Country Music Awards for Female Country Artist. Price also performed a cover acoustic version of Joni Mitchell’s “Case of You,” despite the interruptions of a passing train.

One of the most surprising awards was for OUSA Club Of The Year, which went to the Spear Fishing and Hunting Club. Despite only being two years old, the club has flourished with the support of OUSA. Alongside collaborating with other clubs for various events they held, they also put on “mean feeds.”

Guest speakers Dr Graeme Downes and Alistair McMillan enthralled the audience with their insightful experiences as high achievers in music and sports, respectively. McMillan even went on to mention the small town of Twizel in his speech, verifying his well-travelled credentials.

The most notable achievement of the evening was the Squash Club’s ability to not only be nominated for Club Of The Year for their achievements on the court and as a club, but also their ability to drink all the pinot noir before the awards ceremony had even begun.
This article first appeared in Issue 25, 2014.
Posted 2:58pm Sunday 28th September 2014 by Bella Macdonald.