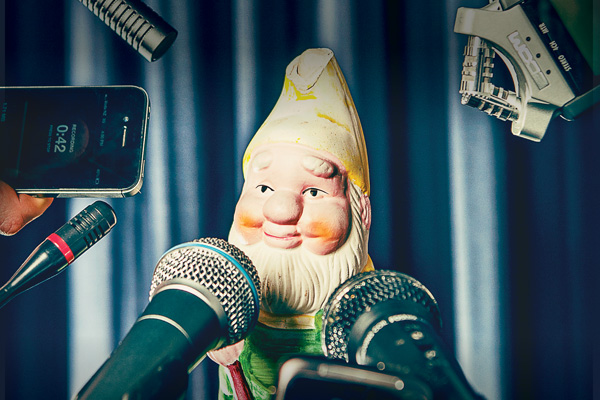 Critic's guide to Young Back Benches

Favourite policy in a sentence: The most valuable stance this Government has for me is their resistance to using tax increases to solve problems. Sometimes tax is an answer, but I appreciate that this government looks to others in the first instance.

Favourite MP: I wouldn’t be a good Southern member if I didn’t say Michael Woodhouse. He is a passionate Dunedinite and puts in a huge effort to get the views of the people he interacts with into Parliament.

Why your party is good for students in a sentence: What the National party has always stood for is the removal of barriers to gaining meaningful work; National’s stewardship of the economy is making it easier for students to gain stable employment when we graduate.

Pick a quote, any quote: “By ‘[this is my] content for this week’ I mean my deadline is tomorrow so if you have five minutes tonight [to fill out this profile] when you're not lovingly staring at your [newly won debating] trophy I would be a v happy bunny.” – Carys Goodwin.

Favourite policy in a sentence: Decisive action is needed to address the 285,000 Kiwi kids living in poverty, Labour’s Best Start policy puts children at the heart of our policy framework by offering families a $60 weekly payment for the first year of their child’s life, extending paid parental leave to 26 weeks and extending free ECE to 25 hours.

Favourite MP: Clare Curran (I get paid to say that), but in all seriousness she is the hardest-working, quirkiest MP, and an excellent mentor.

Why your party is good for students in a sentence: Labour recognises the need for increased student support; we will restore postgrad student allowances, keep student loans interest free, repeal VSM, ensure student representation on university councils, and undertake a comprehensive review into broadening the eligibility of allowances.

Pick a quote, any quote: “An activist is someone who cannot help but fight for something. That person is not usually motivated by a need for power or money or fame, but in fact is driven slightly mad by some injustice, some cruelty, some unfairness, so much so that he or she is compelled by some internal moral engine to act to make it better.” –Eve Ensler.

Favourite policy in a sentence: The Carbon Tax plan, because it finally gets NZ doing its bit to combat climate change, while simultaneously delivering a tax cut to the poorest households.

Favourite MP: Metiria Turei. Her background is incredible, and you can tell how much she’s learned from it when she speaks about our need for solid social services and a decent education system. She’s also just generally nice to have a chat to.

Why your party is good for students in a sentence: The Green Party will make fees and public transport more affordable for students, and work towards a future where we won’t have to suffer from environmental degradation.

Pick a quote, any quote: “I had resorted to Googling 'Dragon Ball Z quotes' but was disappointed by the results.” – Patrick Dawson.

Favourite policy in a sentence: Allowing all school boards to vote to become charter schools.

Why your party is good for students in a sentence: ACT focuses on a strong economy and students’ ability to prosper in the long term, rather than bribing them in the short term.

Pick a quote, any quote: “Only those who attempt the absurd can achieve the impossible!”

Favourite policy in a sentence: Free Tertiary Education, because it is vital for an understanding of complex technologies and systems so that they can be utilised proficiently.

Favourite MP: Jacinda Ardern from Labour; because I like her views of a New Zealand that owns its future, and its assets, that are smart and grow the economy by investing in research and development and clean technology.

Why your party is good for students in a sentence: Internet Party is the only party promoting a return to truly free tertiary education and wiping student loans that already exist.

Pick a quote, any quote: “I am driven by two main philosophies: know more today about the world than I knew yesterday; and lessen the suffering of others. You’d be surprised how far that gets you.” Neil deGrasse Tyson

Hosting Young Back Benches is Wallace Chapman. Wallace is an ex-Otago student with a prominent career in broadcasting. He currently works at Radio New Zealand, hosting the Sunday morning show, and has bFM and Otago’s Radio 1 under his belt. Wallace has recently adventured into the film world, making an appearance in NZ film Housebound.

Back Benches is one of the most well known political TV shows in New Zealand. Conceived around the Backbencher pub in Wellington, the show is dedicated to allowing politicians an out-of-the-house chance to debate controversy. Once upon a time, Back Benches was shown on TVNZ 7. Now that the station has been shut down, the show screens on Prime. Two hosts man the Back Benches post, the first being Wallace Chapman, who will host our version, and the second is Damien Christie, a freelance journalist who used to work with Wallace at bFM.

Getting people fired up is the name of the Back Benches game. With politicians from all over the political spectrum, the debates traverse a variety of topics and opinions. It’s even in the way they name topics; mildly inflammatory titles such as “Asian Invasion” and “Yup – we’re still really fat” exemplify the way Back Benches tries to pit politicians against each other. At the start of the year, Wallace challenged John Key and David Cunliffe to appear on the show, saying it’d be the biggest TV event of the year. We think our event will be bigger, even if neither Cunliffe nor Key are able to attend.

- In 2012, the Backbencher fell victim to a fire, leaving it unusable for the last episodes of the season.

- Wallace considers Michael Cullen the most memorable politician they’ve had on the show.