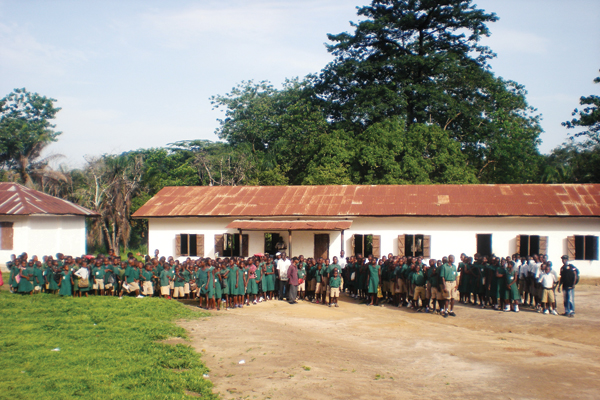 A group of University of Otago Geography students, currently studying GEOG102, will spend the rest of their 2014 study year fundraising for a school in Sierra Leone. The project is set in Kayima, a community in the far northeast of Sierra Leone. The overall aim of the fundraiser is to add a new block, consisting of three classrooms, to the town’s primary school. Through the use of sausage sizzles, bake sales, and quiz nights, the committee aims to raise $10,000 by the end of the year to cover the entire cost of the project. Donation boxes will also be placed around the University with images and a description of what the profits will be funding. Builders, carpenters and materials for the extension will all be sourced from within the Kayima community.

Professor Tony Binns of the Geography Department introduced the project to the students. Binns has recently been made an honorary local chief for the work he has done for the Kayima village over the past 40 years. After meeting with 20 of the local teachers earlier this year, Binns
discovered “the biggest issue was the pressure they were facing trying to fit the children in.” He told Critic, “the issue is, many children want to go to school, but there are simply not enough classrooms to allow that.” As well as the 400 students at the primary school, there is also a secondary school in the town, which currently has around 300 students. Students in the region tend to only stay in school up to the age of 14.

Anna-Marie Mirfin, a Geography student on the committee, said the project is “a great chance to directly help a group of people who are in need of our support.” She said, “through Tony’s close link with this community, there’s no ambiguity about where the money raised will go; we know that our efforts will be effective. By providing more children with an education, we hope to broaden their perspectives for the future.”

Sierra Leone is currently one of the ten poorest countries in the world. Binns said, “the poverty increased severely due to the devastation caused by the [1991-2002] civil war,” which “set the community back considerably.” Life expectancy in the country is only 42 years, compared with New Zealand’s average life expectancy of 81 years. Binns also noted that the country has an extremely high child mortality rate, with 180 in every 1,000 children dying before the age of five. Kayima, which is home to around 3,500 people, is an extremely remote and isolated community that is much poorer than the rest of the country.

Binns told Critic the clinic in the town “also desperately needs help, as does the local secondary school.” These are both projects he is hoping to run in the future. He said “I’m keen to strengthen [Otago University’s] link with the [Kayima] community.”

Students in the Geography department have spent time with Kayima community. Geography PhD student Jerram Bateman has recently spent six months in the region, continuing the work that Binns has been doing within the community. Hana Cadzow, a Geography Masters student at Otago, has also been studying in Freetown, Sierra Leone’s capital city. She is investigating the role of women in producing vegetable crops to supplement household food and income.
This article first appeared in Issue 19, 2014.
Posted 9:16pm Sunday 10th August 2014 by Laura Munro.