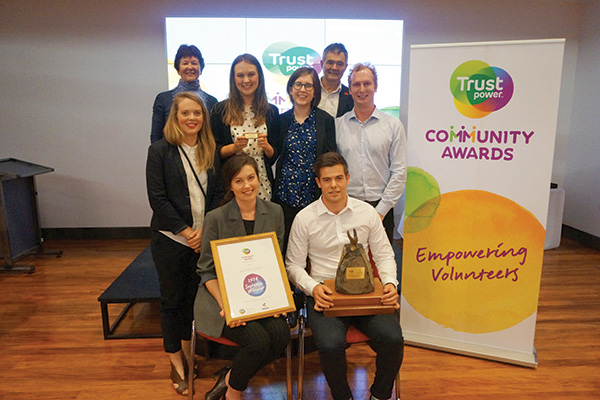 The Awards acknowledge volunteer groups in the community, and were presented by Mayor Dave Cull and the TrustPower leadership team at Toitu Otago Settlers Museum on 5 May. According to TrustPower Community Relations Representative Emily Beaton, Ignite’s contribution to the community was “stand out,” and the group has provided some “really tangible results with ChatBus and FoodShare, their previous clients, both being awarded category placings in the awards.”

Each semester, Ignite recruits students who will then work in teams on an eight-week project for a not-for-profit organisation in the community. Ignite Operations Manager Alice Marsh said Ignite Consultants “create an important connection between students at the University and the community itself.” She added, “[Ignite] does this by using the skills of passionate and talented young students to build strategic partnerships with struggling not-for-profit organisations through business consulting.” Marsh said the win is “incredibly important” to the group and has “validated the work Ignite does in the Dunedin community.”

The Supreme Winner, along with all other category winners and runners-up, are judged on a set of criteria, according to Beaton. “This allows for judges to differentiate between organisations that have achieved results through external funding and those who have invested considerable effort.” She added that the criteria are based on volunteer input, use of resources, initiative and creativity, effectiveness of activities and the impact that it has. “Ignite have done extremely well in all of these areas by building on the resources that are readily available and using them to benefit both parties involved, in this case, the students and the voluntary sector.”

Marsh said the group were looking forward to the National Awards, which would be an opportunity for Ignite “to showcase the wonderful social minded contingent of university students.” Beaton said Ignite would be up against 23 other groups at the National TrustPower Awards that will take place at the end of March 2015 in Wellington. While the competition would be tense, she couldn’t wait to see what Ignite “bring to the event.”
This article first appeared in Issue 11, 2014.
Posted 3:11pm Sunday 11th May 2014 by Claudia Herron.