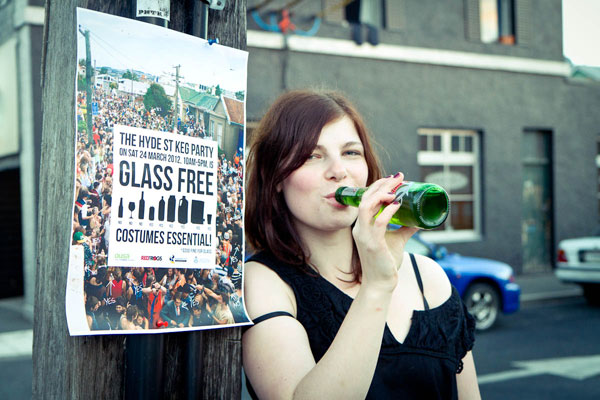 Powers that be make rules. Rules made to be broken.

Confusion has arisen over the enforcement of the proposed glass ban for the Hyde Street Keg Party.

Hyde Street Party posters distributed by OUSA throughout the University state that the event is to be glass-free and that $200 fines can be dished out.

However, OUSA do not have the authority to issue fines for possession of glass (nor do they want to). In order for a legitimate fine to be imposed, the Dunedin City Council (DCC) would have to pass a by-law making the possession of glass on Hyde Street illegal. Critic understands that no effort to do so is underway, and it is highly unlikely that it will happen before Hyde Street kicks off.

The University has a similarly limited power to impose fines. The Proctor has said that people who are identified as breaking bottles and have not been arrested by police may have their names passed on to him. This could result in a fine; however, the Proctor points out that he and the University “have no authority to fine anyone [merely] for having glass.”

The Dunedin Police, who will have a presence at the event, have been made aware of the glass ban, but were just as curious as Critic as to its legal standing. A Police representative told Critic that he would like to know “who will enforce that.”

Critic also spoke with Michael Bathgate from the DCC, who reiterated that the glass ban was a condition of the road closure as agreed to by a number of parties. When asked who could enforce it, Mr. Bathgate responded, “the organizer can enforce it and that’s all I’d like to say on the matter.” Which, given that OUSA is the organizer of the event, this just takes us back to square one.

OUSA’s Communications Department confirmed that OUSA has no authority either to restrict access to Hyde Street, or to enforce the no-glass policy.

Regardless of OUSA’s muddled stance on glass regulations, their input this year has been well-received and even hailed as “perfect” by many Hyde Street residents who “don’t wanna clean up glass.” Vice-Chancellor Harlene Hayne is confident that “OUSA’s involvement will go a long way to maximizing the fun while at the same time minimizing the harm.” The Proctor felt the presence of OUSA “can only assist”, pointing out that it is more effective for students to be corralled by OUSA than by a line of police.
This article first appeared in Issue 4, 2012.
Posted 4:27pm Sunday 18th March 2012 by Claudia Herron.