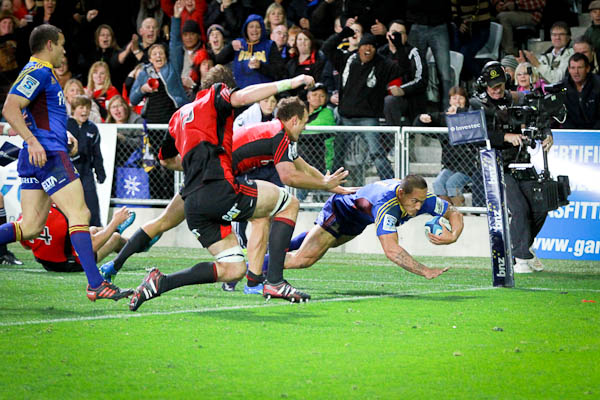 Critic goes to the Rugby

Apparently a part of my job as sports reporter for Critic this year involves actually going to sports and reporting on them so, here we go. Joe (the editor) and I went and mixed it up with the other media types in the press box up the back of the main stand. That guy from 3 Sports with the massive ears was there, so were Nisbo and Justin Marshall, as well as some other weirdo print journalists from around the country. The view from up there is good and they provide sandwiches and refreshments, but as far as I can tell the guy from Radio Live ate all the sandwiches before we got a chance to have a go at them. Guts.

The atmosphere at Forsyth Barr was electric. From about 7.15pm the whole place filled up almost instantly and suddenly it was absolutely packed.

The student area or “Zoo” is a horrendous example of committee thinking and cheap marketing, but it was a hell of a success. The animal theme is cheesier than the knob of an unwashed homeless guy but the young-uns seemed to be lapping it up: Guys in animal suits; A sexy (from a distance at least) girl lion-tamer and more party tunes and sing-a-longs than Upstairs Cook. Throw in a spa pool and the whole thing could just catch on. My favourite part of the game was when during a break in play the Zoo DJ dropped a massive Skrillex WOP WOP bassline all over the screaming scarfies and the place just erupted. Skrillex and code; an uncomfortable combination that awkwardly reflects what being a scarfie is all about these days. Forsyth Barr Stadium may be the only rugby venue in the world where it's a good idea to smash a couple of rails before heading to the footy. It's that kind of atmosphere.

The Zoo stayed suitably ruckus for the whole game. Everyone crammed forward towards the field and it was standing room only. Highlights included chants like “Giuld-ford, on the piss. Guildford on the piss”; and when the guys at the front started ripping the advertising hoardings off the fence and passing them up through the crowd. It looked like everyone was having a mean-as time and I hope they’ll keep coming back and make it a regular thing.

The actual footy was pretty enthralling. In the early stages the Highlanders created a lot of scoring chances but poor decision making and occasionally comical panic meant the only scoring was traded penalties. John Hardie in particular was playing out of his skin but on a couple of occasions after making a break he didn't have the composure to find his wingers looming up, and the move would break down. In typical Crusaders fashion they turned their first opportunity into a try. As if to show John Hardie how it's done, Matt Todd broke the line after some surprisingly subtle hands from Robbie Fruen, he then calmly assessed his options, drew in the fullback and sent Israel Dagg trotting over. Two minutes later Andrew Hore somehow stumbled his way over after emerging from ruck 15 metres from the Crusaders line and it was 10 all. Phil Burleigh reversed over in the corner at the endof the first half to add to another Sopoaga penalty making it 20-10 at half time, a margin the Highlanders deserved. They were easily the better side in an intense first 40.

Everyone at the ground knew the Crusaders were going to come roaring back. They always do. Within quarter of an hour of the second half Andy Ellis had scored and choir-boy Tyler Bleyendaal kicked two penalties. That meant 24-20 with twenty to go and the Highlanders were making horrible, gutteral choking noises.

But. No. Apparently these Highlanders are winners and after some neat draw-and-pass Hosea Gear scored in the corner and the Highlanders were back in front. The next 10 minutes was all about clinging on desperately. Bleyendaal missed a drop goal and a long-range penalty which would have tied it up, but somehow the Highlanders gutsed it out.

The guy running the scoreboard and clock on the big-screens had an absolute shocker all night. He consistently screwed up the score and when the clock said time and the hooter blew, there were still 5mins left on the Ref’s watch. The Highlanders thought the game was over and tried to kick the ball out to end the game two further times, but the Crusdaers just kept getting one more chance. It seems that for some reason God hates the Highlanders and was doing his best to create yet another heart-breaking final seconds loss. It was a fucking shambles. Eventually the ref blew his whistle and all 23000 people showed their collective relief by letting out an almighty bellow, it was deafening.

Somehow, the Highlanders are top of the New Zealand conference and they look like they're the real deal. Jamie Joseph has bought together a bunch of misfit players from around the country and combined it with some genuine class to make a really balanced side.

You heard it here first, Critic's favourite Highlander Aaron Smith will be an All Black within 12 months. He's small and skux, and came and gave us an interview even though he was literally covered in ice packs after the game. Good cunt.