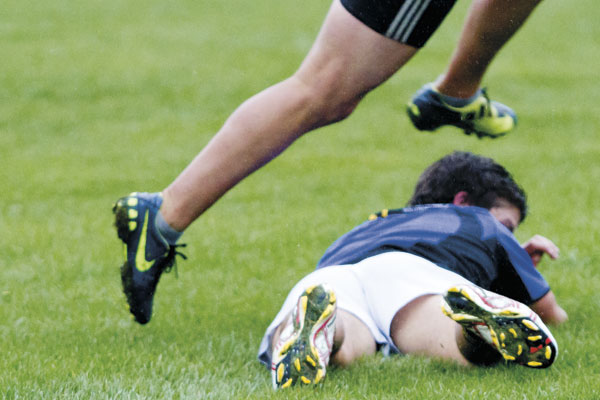 The Otago Rugby Football Union is officially broke. They can’t afford SoGos, they can’t buy ramen, they can’t even pay the power bill. And they certainly won’t be springing for the whole team to get tuggies down at Lucky Sevens on Friday night.
At the time Critic went to print on Thursday evening, no financial backing had materialised for the troubled union. The deadline for avoiding liquidation was Friday 4pm.

The ORFU suffered an $862,000 loss over the past financial year and is forecasting a further $750,000 deficit for the coming year. These losses are on top of significant existing debts that have financially crippled the Union. If liquidation is not avoided then Otago will almost certainly be unable to field a team in the ITM Cup competition.

The New Zealand Rugby Football Union has been offering kind words and business support over the last month or so, but has refused to bail Otago out. NZRU Chief Executive Steve Tew told the New Zealand Herald that the “bottom line is [that] the hole is too big ”.

Dunedin mayor Dave Cull said the City Council has no plans to save the ORFU, while Prime Minister John Key told the media that the government’s “Preference would be for them to find another way through that, but obviously we are concerned about the situation”. No formal request for assistance had been submitted to either the council or the government.

The dire financial situation is the result of a series of unfortunate events and financial missteps which have led to the ORFU gradually sinking into the mire. Woeful crowd numbers at Otago games are the visible side of the Union’s decline, but other factors, such as the burden of transferring to the new stadium, and a tough economic climate, have not helped matters.

Despite its probable collapse, the ORFU is currently running an ITM training group that will make up the bulk of any eventual ITM Cup squad. Most of the players are young, developing talents on basic contracts who may have put other opportunities on hold to have a shot at a professional rugby career. If the ORFU goes into liquidation these players will no longer be paid.

Critic spoke to Kieran Moffat, a member of the Otago ITM training group who is contracted to the ORFU. Upon hearing the news he said “I’m pretty gutted, there are going to be some disappointed boys around … The future looks pretty bleak, but there are a number of ways things can go.”

In recent years the Otago Union has actively recruited players from around the country to join the province. Promising players such as Wellington’s Buxton Popoali’i and Canterbury’s Rob Verbakel are just two of those now facing an uncertain future. Most other ITM Cup squads are already full, so opportunities to join up with other unions will be limited.

In recent years Otago has gained a reputation for overpaying players to tempt them south. A high-profile example occurred when Otago offered one-season wonder Fetu’u Vainikolo double the salary his home union Northland was willing to pay. Vainikolo was consistently poor for both Otago and the Highlanders and spent considerable time out injured before transferring overseas.

One piece of positive news to come out of the potential collapse is that the fallout will not affect club rugby players, at least in the short term. Tew has stated that the NZRU will ensure grassroots rugby continues as normal in Otago during 2012.

The uncertainty over the future of the ORFU has brought the future of provincial rugby into sharp relief. Provincial unions cannot carry on running at a loss every year, especially as the NZRU has made it clear that it will not financially salvage bankrupt provinces, even those formerly considered “Too big to fail”, like Otago. As such, many rugby journalists are predicting that Otago’s decline will result in significant structural changes to the domestic game.
This article first appeared in Issue 2, 2012.
Posted 4:53pm Sunday 4th March 2012 by Gus Gawn.