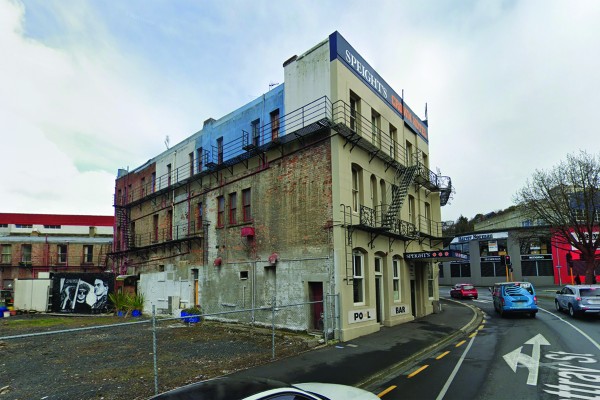 What did you expect living next to our best gig venue? Silence?

Around 60 supporters of Dunedin’s music community gathered for a hui to support the Crown Hotel, amidst fears that the renowned music venue could be threatened by a new apartment building next door. The group are hoping that a protest on Sunday 7th of August could help raise further awareness of their cause.

David Bennett, an organiser of Save Dunedin Live Music, said that the Crown Hotel on Rattray Street is “the heart and soul of [Dunedin’s] music community… with no barriers, they’ve been a great supporter of live music.” As one of only a few remaining live music venues left standing in Dunedin, though, David said that its future is potentially being threatened by the “residential apartment block right next door”.

Central to their concerns, they said, was that current soundproofing rules were woefully insufficient. Hugh, a music production lecturer at Otago Uni, was on hand to explain the technicalities of the current system. Under current rules, new buildings in Dunedin only need to provide enough soundproofing to reduce noise levels by 30dB, at 500Hz frequency. Soundproofing was not measured below 100Hz - meaning that the noise from a normally-tuned bass guitar (at 41Hz) would not be reduced at all. He added that the sound spectra used for measurement means soundproofing would effectively only reduce noise levels by 20dB – “levels which would not even render a conversation unintelligible”.

Speakers expressed fears that this meant the Crown Hotel was effectively being set up to be a magnet for noise complaints. The current rules call for “reverse sensitivity”, which according to speaker Dr. Fairleigh Gilmour, “means nothing”. As long as apartments are built following the soundproofing rules above, “the onus is entirely on musicians” to reduce their noise levels. When a noise complaint is laid, there is no room for negotiation, either. According to the Dunedin City Council’s (DCC) guidelines: “assessment of [excessive] noise is subjective and noise measurements do not need to be taken… If the noise is not reduced, the Noise Control Officer may seize and impound the equipment, or… make it inoperable.”

This means noise complaints can quickly become fatal for live music venues. Stephan, who ran the former Arc Café on High Street, said that despite spending $78,000 on soundproofing, they were considered a “nuisance” by noise control officers and residents, who frequently shut down gigs with noise complaints and eventually forced its closure. The threat still hangs over live music venues today. Sound engineer David Bennett said noise control was called three times to the Garbage Day concert at New New New Brewery, as early as 5:45pm.

Keeping Dunedin’s live music scene healthy, said Stephan, was vital: “If the only game in town is the University, you become like Canberra. And no one ever has a good time in Canberra.” Speakers pushed for sustained pressure to be put on the new building’s developers, to encourage them to engage with the music community’s concerns; and the DCC, to make amendments and protect live music venues from being threatened by noise complaints.

The new four-storey building, featuring a retail shoplot, offices and apartments, is being developed by Anchorage Properties Ltd., owned by local businesspeople Lincoln Darling and Chris Murphy (who also own real estate firm Darling Realty). Speaking to the Otago Daily Times in July, Darling said the area was “neglected through economic factors for too long”, and that his new building would “enhance the area and complement the Crown Hotel next door”. Lincoln and Chris did not respond to our requests for comment, saying they were on leave until August 8. They encouraged any comment to be directed to Nick Darling, who also did not respond in time for publication.

Save Dunedin Live Music hopes to capitalise on the momentum from this hui, with their “Damn the Man, Save the Crown!” protest this coming Sunday, in the Octagon. They’re encouraging those who are interested in “protest[ing] planning regulations that are eroding our music scene… [to] join us for a day of music, speeches, and some good old protest action like chanting catchy slogans and shouting at Town Hall.” The protest is expected to begin at noon.