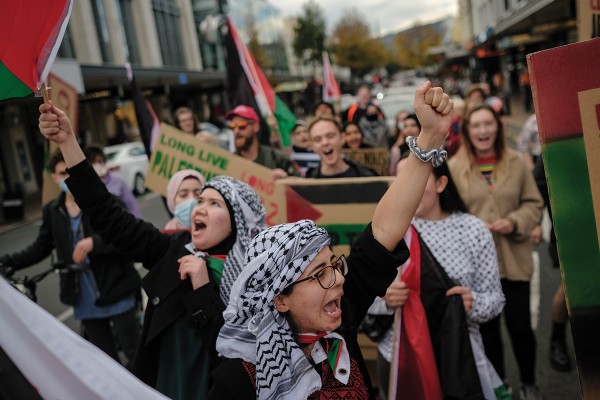 “From the river to the sea, Palestine will be free”

On Saturday May 7, the Palestine Solidarity Network Aotearoa (PSNA) held a rally from the Museum Reserve to the Octagon. Around 60 people took to the streets with placards, chanting the Palestinian independence slogan: “From the river to the sea, Palestine will be free”.

The protesters aimed to bring awareness to a tragic chapter in Palestinian history: the ‘Nakba’, which happened during the 1947-49 Palestinian civil war. During the Nakba, literally “the catastrophe”, an estimated 750,000 Palestinian Muslims (around half of the Palestinian population) were evicted or displaced from their homes by Zionist militias seeking to establish a new Jewish state on Palestinian land. Thousands were killed, mainly unarmed civilian villagers, and hundreds of villages were abandoned and destroyed. Many were subsequently taken over by Jewish settlers, and renamed with Hebrew names.

“Zionist ideology originated in 1897, long before Palestine was occupied. Before 1948 [when the State of Israel was formed] it was Palestine and it remains so today,” said Rawaa Elhanafy, a Palestinian student and one of the organisers of the rally. That’s why “a way of supporting [the movement] is recognising cities [such as Jerusalem] as Palestine.”

Although the Nakba happened over 70 years ago, the situation remains urgent because persecution of Palestinians continues today. A United Nations human rights report has said that Palestinians continue to live under an “oppressive rule of institutional discrimination”. The situation now, it says, is “apartheid,” which is a “crime against humanity today and into the future, wherever it may exist”.

“The Jews were one of the most persecuted people in Europe, then they turned around and implemented the same things done to them on the Palestinian people,” said protestor Andrew Tait, president of Unions Otago. Rawaa told Critic Te Arohi that: “What’s happening in Palestine is not a conflict and it’s not a war, it’s a specific ideology of raiding and occupying a country… it’s terrorism.” Although Rawaa has family in Palestine, she hasn’t been able to visit for a long time as “it’s not safe.”

Officially, New Zealand’s Ministry of Foreign Affairs is supportive of Ukrainian resistance, but “preaches non-violence” in the context of Palestine. This was a discrepancy that was condemned by protesters. Brandon Johnstone, a member of PSNA, said that: “People under occupation have the right to protect themselves,” whether Ukrainian or Palestinian. “Ukraine is a free and independent country that should not be occupied by another country. Palestine is the same,” said Tie Jian, a Muslim Chinese Kiwi. According to Tie, “Israel is an occupational state,” and “the UN resolution to give Israel the right to exist did not give Israel the right to kick the natives out.”

Andrew Tait advocated for a resolution supporting the Palestinian “BDS” movement: boycotting Israeli products, divesting from Israeli assets, and economic sanctions against the Israeli state. According to Andrew, the illegal occupation of Palestine stems from the belief that “military force is what makes justice in the world,” and “in our struggle for equality we need to confront this principle.”

You can help support the movement for Palestinian solidarity and freedom by following and donating to Palestine Solidarity Network Aotearoa.