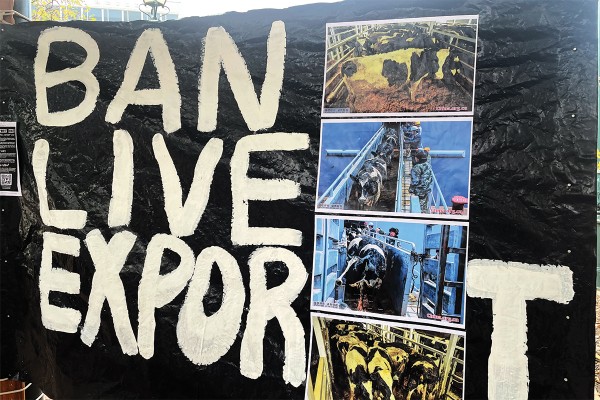 On Saturday April 30, around 30 people gathered in the Octagon as part of a nationwide protest to call for an immediate ban on all live animal exports. People held signs with images of animal abuse amidst a number of speeches and chanting. Despite high-profile announcements that the practice would be banned last year, according to protest organiser Gaylene Smith, the Government is only in the process of “winding it up”. The Ministry of Primary Industries have said that live animal export will only be prohibited from April 30, 2023.

Gaylene told Critic Te Arohi that “It’s great to have this support and seeing like-minded people who want this industry to stop.” She wished, though, that “farmers would come along as well.” “Mental health issues are big amongst farmers,” said Duke McLeod, a PhD student at the protest. “I don't think anybody should have to work in those conditions,” but, “they're reliant on that money to feed their families,” said Duke.

Live animal export has a long and controversial history. These exports primarily involve beef and dairy cattle transported by ship, largely to China for farming and breeding there. Already this year, an estimated 25,000 beef and dairy cattle have been exported. Over the three-week journey, cattle are often forced to stand or lie in their own excrement, with many dying due to exposure to heat, cold, hunger, thirst or injuries. Sometimes they will be left for over four days before they are disembarked from the ship. The SPCA has condemned the practice, saying that it has “decades of repeated evidence of suffering and cruelty,” and that “Current live exports of farmed animals both compromise animal welfare and damage New Zealand’s reputation.”

The suffering does not end when the animals arrive. The New Zealand Veterinary Association’s chief veterinary officer, Helen Beattie, said that “It is more difficult to guarantee all the physical and mental needs of our animals are met once they leave New Zealand shores.” For example, in China, a lack of pasture and weaker animal welfare protections means that cows exported from Aotearoa are kept in indoor concrete factory farms, where they are milked three times a day and artificially inseminated every month. The cows are then slaughtered when they no longer generate any profit: capitalism at its finest.

The irony of the situation is that even if you are pro-dairy, live export could help overseas buyers cut out New Zealand dairy entirely in the longer-term. This is because exporting locally-bred animals means giving away one of the New Zealand dairy industry’s key strengths: its genetics and selective breeding programmes. This may not be all bad, though, seeing as an estimated 90-100% of East Asians, and 80% of Central Asians have an impaired ability to digest lactose. According to Duke, the aggressive marketing of dairy to South-East Asia reveals the “inherent racism of the industry”.