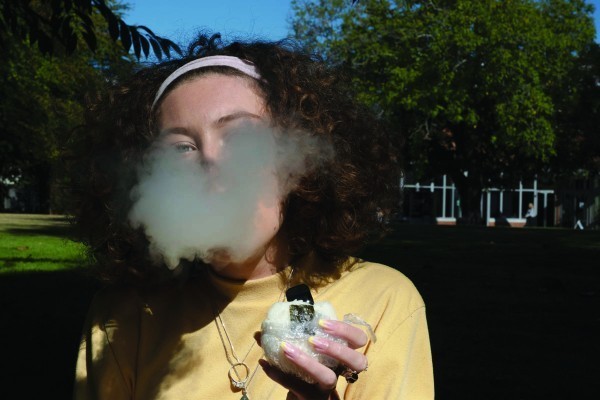 Gone in a cherry ice-scented cloud of smoke

A new vape shop has taken down all of its TikToks after a Stuff investigation found kids under 18 were interacting with their posts, potentially breaching the law as a result. The owners have said they’ll be changing their ways from now on, with a removal of most of their posts in a social media reset.

On April 16, Stuff published an article about the TikTok marketing tactics of the Hi-Fo Vape Club, which recently opened on Albany Street. In one video, someone grabs a handful of vapes while a voiceover goes: “Omg, we have so many disposables. Who's gonna help us get rid of all of these? So many yummy flavours!!!!” The article found under-18s were actively commenting on the piece, including one who asked how they could get a vape of their own. While age restrictions are notoriously hard to enforce online, having vape ads being viewed by kids would potentially mean Hi-Fo is breaking the law. Aotearoa currently bans the marketing and sale of vaping products to those under-18.

Since then, Hi-Fo have taken all their TikToks down. Their account is still present though, with 203 followers. The owners of Hi-Fo told Critic Te Arohi that they took the TikTok ads down because they found that they couldn’t control who viewed their TikToks. They said “TikTok is a new social platform [for] people of all ages to express themselves. We have removed the previous videos as we can't control who views them. We want everyone to be safe and get our name out there, so for now we are focusing [on] word of mouth, and we will establish an internal review of the content on Tiktok.”

The company’s Instagram, hifo.vape, was also used for promotion, with a post advertising “FREE DISPOSABLES!” However, the page only has 24 followers and has not been active since February 1. They don’t appear to have a Facebook page.

Hi-Fo has now changed their marketing approach, the owners said. They told us that “[We’ve] gone back to basics for now. We have talked to those staff members who have posted the videos and they have said sorry and it won't happen again. Before we have very clear and strict rules [about] social media postings, we will not post anything.” Critic suggests Hi-Fo should reach out to adult-only audiences using the only social media platform populated entirely by oldies: LinkedIn.