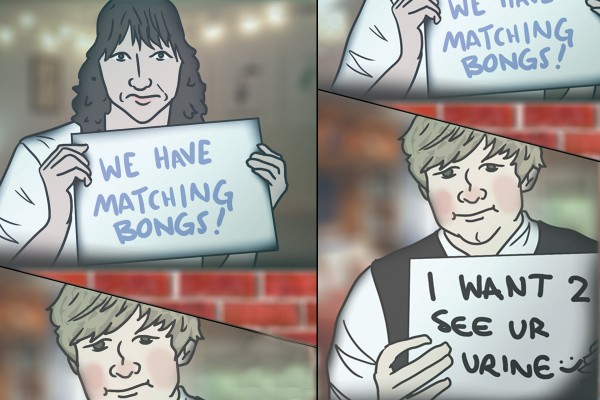 Do You Believe in Love After Lockdown?

The pandemic has had its moments. Other than the hallowed launch of Pokémon Go in 2016, I’ve never experienced such a sense of community before — which is odd considering we aren’t allowed to physically hang out. A lot of us formed socially distanced friendships with neighbours. We wrote letters in our windows, reenacting Taylor Swift’s You Belong With Me music video. We formed unlikely bonds, dreaming about the day when they’d wake up and find that what they were looking for has been here the whole time.

Relationships formed over lockdown are as weird as you’d expect. Piss jars, illegal cheese rolls, bongs, and orgasming to ABBA are some of the delightful tales you’ll read from people turning their lockdown romances into reality. But what happens when you finally meet your socially distanced friend in real life? For some, it’s like catfishing in reverse. You’ve seen them at their worst and fallen in love with their gradual mental decline over the months. Meeting the socially-adjusted version of them in a regular context isn’t the same. The shackles of your trauma bond are broken forever.

For Esther it all started when Nick*, the lone boy next door, started blasting Mamma Mia through his UE Boom. Her flat could not resist his sweet siren call. “We went outside to dance in the garden, and after that, he would play Mamma Mia for our flat periodically. We’d sometimes play Mamma Mia back. We began leaving each other messages in the window — checking up on each other, song requests, inviting him to play games over Zoom, that sort of thing.”

When entering Level 3, Esther’s flat hosted a pōwhiri and invited their communal boyfriend over to join their bubble. She described it as “awkward” — nobody remembered how to talk to humans, least of all Nick, whose balls by this time were unfathomably blue. He got upset when learning about Esther’s relationship, and began whinging when she wouldn’t let him slap her butt.

Esther’s flatmate “discovered a weird territorial streak when we actually met, and I still feel weird about it. I much preferred the friendship from a distance when music was played back and forth,” he said. “In person I just got irrationally mad. Like, these are MY friends! This is MY bedroom! What are you doing here, you MAN?!”

“I liked my idealised Nick more than the real one. And I think he liked idealised me more than actual me. Also he was dry.”

“So dry,” another flatmate agreed.

Esther and Nick are still acquaintances and have hung out occasionally at flat parties. He is now dating a highschooler. However, Esther laments, the magic was gone and “it will never be the same.” To this day, hearing Voulez-Vous makes her feel a certain way.

Ruby and her neighbours bonded in lockdown over a jar of human piss. “Our neighbors were quiet people,” Ruby began, sighing and taking a lusty drag of her cigarette. “We rarely saw them before lockdown but our kitchen sinks had windows facing each other. Once lockdown started, we started a neighbour sighting tally. Every time we physically saw them we added a strike to the kitchen backsplash.”

“Then we started communicating. It all started innocently. We both put pineapples in our window. Then I hung up my painting of Peppa Pig being crucified. They replied with a plush teddy anteater in bondage rope. We exchanged drawings of genitals, and funny quips.”

“We continued exchanging hellos and doodles. We even celebrated people's birthdays and graduations through window writing. I quite liked it, a rare human connection.”

“But they say you should never meet your heroes,” Ruby whispered through gritted teeth. And yet that’s just what they did. Their bubbles held a socially distanced meet and greet outside of their houses. The neighbours had baptised them with new names over the weeks, as they’d watched them through the window. “I was Lucy, and [my flatmate] Heath was called Andrew. My neighbour then told me that they thought Andrew was a dick.”

“In the days following this conversation, our messages in the window had a good flow.” Ruby wrote ‘Andrew wants ur pee,’ in what she thought was a “hilariously absurd comment”. “But alas, they responded with a hot jar of piss on the windowsill. I'm not sure whose piss it was.”

For some reason, the urine offering didn’t deter Ruby from visiting the neighbour’s pissy flat once resctrictions lifted. “I won’t lie, it was fucking weird. They had a whole cupboard full of Uno decks, and other oddly specific things. But I still see them around. They get less weird the longer I know them.”

“Meeting them really ruined the magic of the strange people in the window,” Ruby murmured. She clenched her fist and snubbed her cigarette butt into the ground. Perhaps it was just a trick of the light — but I thought I saw the sparkle of a single tear caught in the corner of her eye.

Jenny met a lad in lockdown who ended up becoming her boyfriend. She was on Tinder during level 4 due to “attention and boredom”, but one fateful swipe right changed everything. Unlike the good and responsible citizens from our other tales, they decided to burst their bubbles and illegally meet up for a date. “It was the first time I hadn’t slept with someone on the first date, because we were social distancing,” Jenny laughed.

“Initially, nothing was going to happen,” she said. “I went on ghost mode on Snapchat so my best friend wouldn’t know where I was, but we were in fucking lockdown together, so that was a bit stupid. He’s from the south and I’m not from the south so it was all flirting like — ha-ha, you haven’t had a cheese roll before? You've gotta get a cheese roll. And so I got a cheese roll from Night n’ Day, and we had our first date at 10pm on that disgusting bench outside Willowbank Dairy.”

“We were both drunk and I ate the cheese roll and gave him a review. Then we went home — he went to his house, and I went to my house. We didn’t touch. We did an air fistbump though.”

The cheese roll tasted fine, but Jenny is lactose intolerant and hasn't had one since.

Jenny and her illicit paramour didn’t meet again until lockdown restrictions were lifted. It took a while for them to become official, as his Tinder bio specifically said that he wasn’t after a relationship. “It was quite tortuous before he decided to get in a relationship with me. We were just good friends, but now it’s going good.” Jenny credits their blossoming relationship to his mullet, which she describes as “quite nice”.

In regards to meeting him for the first time in real life, Jenny said that she “was surprised that he was shorter than me, which was quite funny [...] I think he looks like those hamsters that are really fat and look like spheres.”

Jenny also has an anecdote about her flatmate, a star-crossed romance that was never meant to be. “My flatmate Daniel, and the girl who lived in the flat across from us, had the same bong. Did you see people holding up Taylor Swift signs? I made a Tik Tok of them holding up notes. That’s why I made a TikTok account. Her name was Emma (age 22), and they were gonna have a cute date but Daniel was a fucking idiot and it didn’t happen. That was the end of it. But they had the same bong, which was cute.”

We’re in quarantine again, so here are some tips for wooing your neighbour: