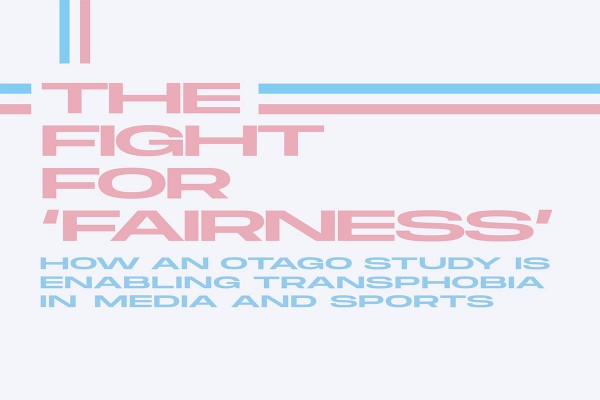 How an Otago Study Is Enabling Transphobia in Media and Sports

The Fight for ‘Fairness’

We rely on science to separate fact from fiction when it comes to contentious issues, but it can be politicised by groups to spread fear and misinformation. A 2019 publication by researchers from Otago has been used in exactly that way.

Trans people face an uphill battle, both legally and socially, in many parts of society. The crossroads of sports, science, and media is certainly no exception. In the past week, the Tokyo Olympic Games began and an anti-trans group, Speak Up For Women, held a public event at a DCC venue. Both events have become sites for transphobia and moral panic supposedly about ‘protecting women’ or ‘free speech’, particularly targeting trans women athletes. The end result is an increase in hate directed towards the trans community.

Across the board there are 211 kiwi athletes competing at the Olympic Games, many of whom will be medal contenders. One of those promising athletes is Laurel Hubbard, a Kiwi weightlifter set to be the first openly transgender athlete to compete in the Olympics.

The announcement was mired by transphobic reactions, ranging from well-meaning but ignorant to violent and dangerous. To focus on one media outlet, Newshub published numerous articles that featured opponents of Laurel Hubbard’s inclusion in the New Zealand Olympic Squad, uncritically relying on their arguments for the bulk of these pieces. They reported on Judith Collins calling for “honest conversation” about trans women in sports, Piers Morgan “blasting” Laurel Hubbard’s selection, and the views of anti-trans group Save Women's Sport Australasia.

Almost a third of the articles published in the United Kingdom on the day of Laurel Hubbard’s inclusion in the squad deliberately dead-named Hubbard, according to an analysis in the Gender and Language Journal. This ignores media guidelines and basic human decency, and actively causes harm in trans communities. As AUT senior lecturer and trans martial artist Lexie Matheson ONZM told David Farrier at webworm.co: “It’s pretty shitty in the cyber world for us right now. Nothing new.”

Whether out of bad faith or sheer stupidity, anti-trans groups misuse genuine scientific discussion to provide cover for hate. And when there are flaws in the science being published, it makes it even worse. Much of the rhetoric emerging from anti-trans groups nationwide and across the globe is simply not worth engaging with. But since so many Kiwis have now heard these ideas from friends, family, the media, and the dark depths of Facebook comment sections, it’s worth debunking some of the more popular ideas.

“Transgender weightlifter Laurel Hubbard might have 'unfair advantage' - expert” is the headline of a widely-read Newshub article from 2018. No author is listed. But the article quotes Otago Professor Alison Heather as the expert referred to in the headline. Similar articles could be found on RadioLive and Stuff.

The following year, Professor Heather co-authored the essay “Transwomen in elite sport: scientific and ethical considerations” with Dr Taryn Knox and Associate Professor Lynley Anderson from Otago’s Bioethics Centre. The essay was published in the Journal of Medical Ethics. It concluded “the advantage to transwomen afforded by the IOC guidelines is an intolerable unfairness” and provided apparent scientific backing to the claims of unfairness made in the media.

When asked for comment on whether this idea was harmful, the researchers told Critic that “to reject the idea [of trans women having an advantage] based on ideology alone (rather than empirical evidence) would be harmful to elite ciswomen athletes”. They also said that “name-calling (TERF, transphobic etc.) is not helpful and shuts down conversation”, despite none of our inquiries using these words or making similar claims.

Their essay defines fairness as “the idea that all athletes must begin from roughly the same starting point”. Presumably, the “starting point” is intended to mean the external or physical features of the athletes. This definition is absurd. Basketball players Chris Clemons (1.75m) and Shaquille O’Neal (2.16m) clearly aren’t coming from “roughly the same starting point,” but nobody is complaining about how it’s unfair that Shaq is so tall. No-one is proposing chemically altering Shaq’s height so that there’s a more level playing field.

The rules of the sport define the arbitrary obstacles athletes have to overcome, which is why you can’t punch someone in a game of rugby, or use a ladder to help you slam dunk in a game of basketball. Using a ladder wouldn’t be fair, because it breaks the rules. Laurel Hubbard competing is fair under the Olympic rules. But that’s not to say these rules are right or ethical. In fact, these testosterone limits are arbitrarily prohibitive — and demonstrate that fairness is hard to meaningfully define. Any argument relying on ‘fairness’ should be met with skepticism.

Sport is also, by nature, competitive. Athletes attempt to beat their competitors, and to beat them you need, well, an advantage. It may be your genetics. It may also be the equipment you use, it may be the amount of hours you put into training, or it may be the sheer grit and willpower you exert when you compete. Every athlete who has received a medal at the Olympics has had an advantage. The underlying claim in Anderson and Knox’s essay is that trans women have some kind of unnatural and insurmountable advantage over cisgender (i.e. not transgender) women. This isn’t true.

The ‘Transwomen in elite sport’ essay also claims that high testosterone levels provide “an all-purpose benefit in sport.” This is consistent with the position of the International Amateur Athletic Federation [IAAF] (the international governing body for athletics), known since 2019 as World Athletics, that women with testosterone over a certain threshold have an “insuperable advantage” over women with lower testosterone levels. But many researchers have criticised the IAAF’s conclusions, their methodologies, and the data itself. The New York Times reported in 2018 that three different independent researchers called out problems with the data. An independent review in 2019 identified “significant flaws in the data used by IAAF leading to unreliable results.”

Both cis and trans women with endogenous testosterone above the levels set by the IOC and IAAF are banned from competing, despite there being extremely little evidence to justify discriminating based on these levels. And when someone like Laurel Hubbard manages to qualify with testosterone levels below these arbitrary thresholds, she’s still faced with people bemoaning an “unfair advantage”.

When anti-trans groups do use scientific research, the research usually compares women with high endogenous testosterone to women with low endogenous testosterone, regardless of whether they are cisgender or transgender. Other research compares cis men with cis women. Neither of the comparisons are the same as comparing trans women to cis women. Even if they were valid comparisons, the studies do not draw the conclusions anti-trans groups often claim.

Dr Veronica Ivy, an athletes’ rights’ expert, found that the “unpredictable and unreliable” 2-3% advantage seen in women with high levels of endogenous testosterone was “not enough to justify the discriminatory policies of placing upper limits on women’s testosterone” that currently exist under IAAF World Athletics guidelines. A review by Sonksen et al found no correlation between endogenous testosterone and sports performance.

The second assertion made by ‘Transwomen in elite sport’ is that trans women with testosterone levels under 10 nmol/L for 1 year retain the performance advantage of “their former male physiology.” Most of this argument relies on the first assertion being true. Although, the researchers did justify the claim that bone density did not significantly decrease after hormone replacement therapy, suggesting trans women may have stronger bones than cis women (although they again did not cite a study showing this). This would likely mean faster recoveries from injuries for trans women.

So, both the key assertions made by Otago researchers in ‘Transwomen in elite sport’ are flawed, but that hasn’t stopped the study spreading through the media.

Another popular argument against transgender people competing with athletes of the same gender is that sports should be separated by biological sex at birth, rather than gender. To separate sports by sex is to ignore a portion of the global population similar in size to those with red hair. Imagine just pretending gingers didn’t exist. It would be pretty funny, but absurdly unrealistic. A 2000 study by Melanie Blackless concluded that up to 2% of the population can be considered intersex. This means their chromosomes, genitals, or secondary sex characteristics like muscles and hair, "do not fit typical binary notions of male or female bodies."

While we may believe that our physical condition differs demonstrably based on our sex at birth, and that those differences provide advantages in sports, Dr Ivy argues that “there is no clear biological list of features that allow us to even remotely cleanly separate men from women.” Whether it is testosterone levels, height, weight, or any other physical characteristics, there is no clear, complete, and categorical statistical difference between men and women. For example, the difference between the lightest and heaviest female rugby players in a game can easily be 50kgs, and the difference in average weights between male and female rugby players is less than 20kgs.

Why do we even split elite sports by such arbitrary categories then? Should we just get rid of the gender binary altogether? Ending the binary split between male and female in elite sports could be more inclusive for non-binary and gender diverse people.

Axing the gender binary in sport is the solution ‘Transwomen in elite sport’ came to, after arguing that trans women have an unfair advantage over cis women. However, the proposed solution in the essay is unrealistic and vaguely dystopian. (The researchers disagree, saying “this could be very realistic”, citing the “complex process of categorisation” at the Paralympics as an example.)

The solution in the essay involves creating competitive classes based on an algorithm that would take into account social parameters (such as socioeconomic status) and bodily parameters (such as size, haemoglobin levels, and testosterone levels). An algorithm that accurately and fairly incorporates all of these components would be a huge task, marred with human bias and imbalance. Basically, it’s not realistic.

Unfortunately, that helps anti-trans groups because it means they can ignore the solution and just spreads the other conclusion the researchers reached; that trans women have an advantage over cis women.

If anti-trans groups, which often masquerade as pro-feminist or as existing out of concern for women’s rights, were truly and primarily concerned about fairness and women’s sports, then they would be discussing the lower pay, discriminatory dress codes (like the recent Norwegian Beach Handball team faced), and rules that lead to women (both trans and cis) being banned from competing due to naturally high testosterone levels. On multiple occasions, athletes such as Annet Negesa, have been subjected to medical treatment without their consent to adjust their natural testosterone levels.

There is little outcry from anti-trans groups about these issues because their intentions aren’t to make sports better for women— they’re to scare the public and incite transphobia. Transphobia is not backed up by science, it’s backed up by emotions, specifically (unjustified and unrealistic) fears. But scientists can unintentionally enable these groups further.

Truly listening to the science would dictate that, until we move past a gender binary in elite sport, we should allow everyone to compete in their respective genders and leave trans people alone for once.

Updated on 3 August 2021 to reflect that the article contains the opinion of its author.