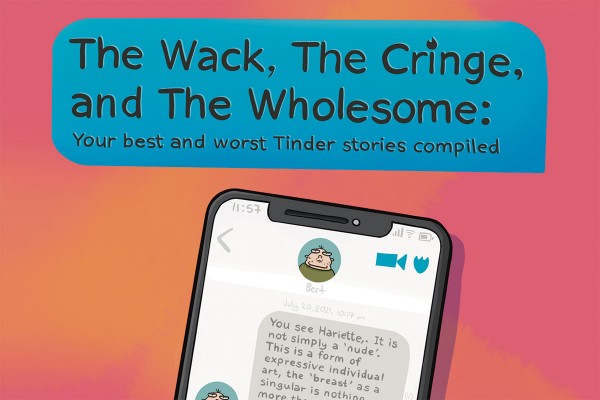 The Wack, The Cringe, and The Wholesome: Your best and worst Tinder stories, compiled

From a big bowl of minestrone to two cases of tonsillitis, Critic Te Arohi has collated the wackiest, cringiest, and most wholesome stories from Otago students on dating apps for your enjoyment. Let’s be honest though. More often than not stories we hear from these apps, and dating in general, are about people (mostly men) doing and saying rather awful things. It’s worth recognising that the dating landscape can look rather bleak, and while we did include some rather shit messages sent, we hope to provide a break from that in this piece. Without further ado, please distract yourself from your own miserable dating life by laughing at stories from the dating lives of your fellow students below.

These stories are just wild and confusing. If any of these people ever write an autobiography and don’t mention these then their autobiography would not be telling an accurate and complete story of their life.

End up swiping on tinder and a goth chick caught my eye. Bio read "just want someone to get fucked up with". End up matching at 1am and chatting for like half an hour. Chat went cold for 2 days. Wednesday night rolled around and it was sad boi hours so I just flicked her a message "Wanna get fucked up on a Wednesday?" She agreed. Picked her up at 10pm, knocked back like 4 nitros and did the bad thing. No sleep later, I'm asking her if she wants to move in at 6am. She agrees. We get some sleep (like 3 hours) woke up and I re-asked this absolutely insane question. She's still keen. So we hired a trailer from BP, got her shit from her parents and she moved in, all with a fucked hangover.

The next 9 days after that we had one living hell of a bender. We stuck around on tinder and invited people over to join the bender. For over a week randoms came in and out of my previously solo living SHITuation.

Best week of my life, best flatmate I could ask for. She stuck around, now we are besties. Thanks Tinder, sometimes you work too well.

I was home for the break last year and in the thick of the post-breakup blues so I thought I'd see what fish were in my hometown sea. I came across a guy who had the classic Arty Boy™ photos (him in an art gallery, wearing doc martens and carrying a keep cup, etc etc) and his bio was something like "the government doesn't want you to know the ducks in the park are free and you can take them home." We matched and had a very bizarre conversation about how many ducks we were each harbouring and how we'd acquired them, which became some big weird metaphor for socialism. The conversation ended pretty naturally and then a few days later he sent me a message just saying "hey I'd just had dental surgery and was super high for that whole conversation" and we never spoke again.

One guy I hooked up with had peaky blinders on the entire time we were hooking up. Very strange experience. He also kept sending me the gif of spiderman lying seductively on train tracks.

Some of these people should probably work on their game, while some of them should never be allowed to date again.

.. it is not simply a 'nude! This is a form of expressive individual art, the 'breast' as a singular is nothing more than gathering of skin and fat. The 'tiddy' is personal. It is you and you are it, it is personal to you and you only, the ability to bestow such a sight on someone's willing eyes is a blessing only you can utilise. Sharing a piece of you that is otherwise hidden from the world behind layers of fabric, concealed from the average eye. By sending such a picture, you are momentarily presenting a hidden gem to the receiver, this person becomes in your debt, a sight they can only see by your grace. Share your art, enlighten those who seek it, those who deserve, those who dare.

"That really isn't a way to get a girl"

"can i hit ya with a pickup line love?"

"don't hate me if ya heard it before i'd love to call you beautiful but beauty is on the inside and i haven't been inside you, yet x"

Proof that not all is lost and that maybe there is love in this world after all.

I started talking to this guy at the start of lockdown on tinder when I was back in my hometown and it was just wholesome from the beginning. No cringe pick up lines just talking about our goals, our careers ect. Because we were in lockdown we had to wait till after lockdown for a date but then had uni exams so had to wait till late June. We went on a date and I had to come back to Dunedin but we kept talking every single day.

He came to visit me twice last year just to see me cause he missed me. And now it’s been 10 months since we have been dating :)

I matched with a girl and we really hit it off to the point where we were talking almost non-stop. She was super sweet and we went on a few dates and acknowledged that we both really really liked each other but she wasn't out to her parents and had a lot going on so we let things kinda fizzle out. A few months later she told me she'd come out to her family and it was a funny and very wholesome story, and even though we don't talk anymore, we still send each other gay memes on instagram.

Me and my current boyfriend matched on tinder and started messaging each other and was going v well and were thinking of setting up a date (v excited) then suddenly he stopped messaging me and i was pissed cos i was looking forward to the date, then he messaged me like a week later saying he didn’t ghost me and he instead dropped his phone in a pot of minestrone while he was messaging me (which turned out to be true). Then we went on our first date and now we’ve been dating for almost 2 years so fuck you minestrone.