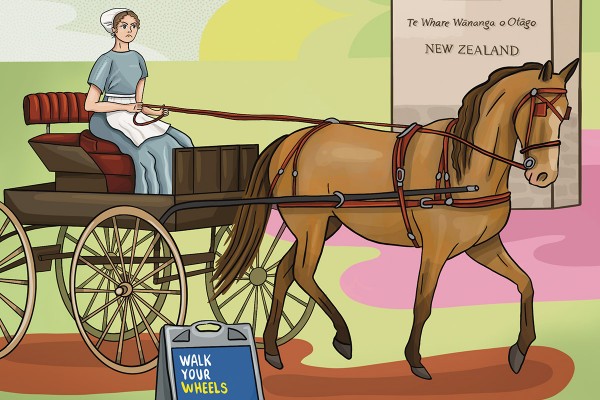 Something’s Amish: I became Amish to see whether it is possible for Amish people to study at Otago

I have always admired the Amish. When I made bread in lockdown, it ignited a pastoral flame within my loins. I began to dream of sheep and buggies, of giant beards and shucking corn. With these scenes of a simple life in mind, I decided to try following the Ordnung — the set of rules for Amish living — for a few days at University.

The Ordnung would not make it easy to study, I predicted. The Amish are banned from using all technology that was invented after 1800 (light bulbs, batteries, steam-power locomotives, etc).

You can’t use Blackboard. You can’t attend most lectures. If you were in lockdown, you would have to forget about uni entirely. It still blows my mind that anybody gained a degree before Google existed, but that was what the Ordnung asked of me.

First, I had to find an Amish fit. The Amish lady #OOTD is a practical expression of their faith, meant to encourage humility and separation from the world. We’re talking simple and functional: a plain, dark dress that covers up those naughty ankles, maybe with an apron if you’re feeling spicy. You can never cut your hair, and it must be worn in a braid or a bun, covered up in a small white Gloriavale cap called a covering. No shaving or jewelry is allowed.

The op shops were surprisingly scarce of Amish-appropriate fits, even the musty old granny shops south of the Octagon with a chute directly channeling clothes from the hospice next door. The only non-sexy black dress I owned was a cute little summery piece with daisies all over it. I covered the pattern and my arms with a grey jumper. My legs were scandalously bare, so I chucked on some tights and covered my bun in a babushka scarf. My grandma, Babcia, is a little 80-year-old Slav lady. When I looked into the mirror in my Amish get-up, Babcia looked back at me.

Some people could pull off Amish vogue, maybe with a cigarette holder and some Jackie Kennedy glasses. Instead, I looked ready to evacuate Poland with a suitcase full of borscht. I strutted to Uni while feigning Amish confidence. I made it to Veggie Boys before I got so embarrassed that I turned around and went home.

I later learned that full-length mirrors are forbidden, as they promote vanity and self-admiration. Things could have been different if I’d followed the Ordnung appropriately.

The central theme of the Amish life is religion, so I needed to attend church. Knox Church is not Old Order Amish Mennonite, but it was the most old-timey looking church within walking distance. I looked up their Sunday morning service with the intention of repenting my sins. Alas, it was not to be. An act of God struck at the last minute. Because I wasn’t allowed to use my phone alarm, I slept in and didn’t make it to Knox Church. O Lord, hear my prayer and forgive my failings.

Realising that not using an alarm could cause other problems, I began sleeping with my curtains open instead. I’ve always wanted to be a morning person. I love the idea of waking up early and sitting on my windowsill with a coffee and hoon, but in reality, I wake up at 11am and read mundane Twitter drama on my phone for hours on end. The Amish lifestyle fixed this for me.

As the natural light woke me up, I became one with nature, waking with the sun and falling asleep at moonrise. My sleep cycle was primitive and wonderful. Against all Amish values of humility, I grew smug. I was in touch with my circadian rhythm, and I was better than anybody else, aside from the fact that I felt sleepy at 10pm. This would make for a rough night out, which explains the lack of Amish babes at Suburbia.

In terms of kai, takeaways didn’t feel very Amish to me, although a survey on amishamerica.com says that Amish order pizza and other home-delivered meals about twice as often as non-Amish. I could do better than that. After a breakfast of watery porridge, I went to the Farmers Market and bought some vegetables. A friend gave me a jar of duck fat from her dad’s hunting trip and I baked a loaf of bread to go with it. A feast of roasted duck fat yams, broccoli, pumpkin, potatoes, and kumara with bread ended up costing me about five smackeroos in total. Rustic as hell, but cooking this meal took me all fucking day and left me no time to nurture my fifteen children.

The worst part in the Ordnung was, by far, the rule forbidding electric heating in houses. I believe this is the reason Amishcore has never kicked off in Dunedin. I cheated, kind of, by using the electric kettle to make a hot water bottle, which I spooned chastely and pretended was my handsome Amish husband. Likewise, wall-to-wall carpeting was forbidden, but that was no problem, because I live in a shitty flat with a chunk of carpet missing in the corner of my bedroom.

I strictly refused to drive a car all week, instead preferring to borrow a horse and cart from the ODT. Giving up driving was easy because I failed my learners when I was 16 and never went back.

Quitting vaping presented more of a challenge. I tried picking up durries, but I missed having sneaky hoons on the toilet, and decided to allow myself a chuff now and again. Strike one from the Ordnung. Phones weren’t allowed, but I permitted myself five minutes a day to continue my streak on Pokemon Go. Strike two. When my friend asked if I wanted to watch H2O: Just Add Water with her, I couldn’t resist. Strike three. I opened Netflix and tried to hide the 50 separate “How to be Amish” tabs.

In general, being Urban Amish was boring. I devoured five books in one day. I hadn’t given myself time to read recreationally in years, so this was a grateful respite from digital hyper-reality, although reading by candlelight creates more eye strain than romance. As time went on, I became slack, allowing more and more technology back into my life. I sincerely struggled without it. I considered paying my rent in cash, but I couldn’t contact my landlady via email or use the ATM anyway.

After overcoming these challenges, I realised that study was also going to be difficult. If I were still an undergrad, I wouldn’t be able to attend most lectures, because they include too many of those devilish projectors and immoral lecture slides. Luckily, I’m doing a thesis, which means I don’t actually do anything ever.

Student Support reassured me that the University would help to accommodate any religion, and this included the Amish. The Uni chaplaincy team were enthusiastically supportive of the Amish. They’d never had contact with any Amish people, nor had they ever heard of students requesting to study without technology, but were willing to provide “spiritual and emotional support through pastoral care and counselling to any and all staff and students, regardless of faith background”. Chaplain Olivia Dawson said that “while I haven’t encountered such requests before, I’d certainly do my best to advocate for a student seeking to study in a non-traditional way based on faith and religious beliefs”. It was time to test whether these reassurances would hold true with my new lifestyle.

I was shocked to find myself infinitely more productive without the internet as a distraction. I sat outside with a notebook and wrote portions of my project by hand. It was about three pages long, which is more than I’ve written all year. The part that fucking sucked was not being able to look anything up. I relied on books as much as I could, a lost Amish waif aimlessly wandering Central Library without access to the digital catalogue.

Then I realised if I were to sustain my Amish lifestyle, further work on my thesis would be impossible. My supervisor took me aside and told me I would not be able to graduate without submitting my thesis online. There was no way around it.

My first response was despair. I then remembered that I was a humble, submissive woman and in no place to argue. I slinked off to dag some sheep.

There was a bigger picture here, I realised. The grim reality is that many students have limited access to technology, Amish or not, and it’s punishing for them to progress without constantly utilising on-campus resources. Assimilating ever-advancing technology into our lives, while exciting and accessible for many, creates impassable barriers for others. And it’s increasingly difficult to maintain friendships without a smartphone in your hand.

I was very bad at being an Amish lady. It was depressing to realise how dependent I am, not only on modern living, but on technology for entertainment. I did temporarily fix my sleeping, which has fallen apart again with the reintroduction of my phone. I was also far more productive and healthy. While unsustainable in modern Dunedin, my goal is to retain the better habits I developed and microdose an Amish lifestyle.

If you’re Amish and offended by this experiment, you shouldn’t be reading Critic anyway. That’s not in the Ordnung at all.